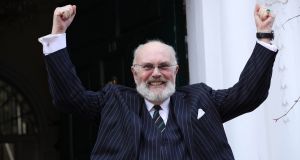 Senator David Norris celebrates at home after hearing the news of his success in the Seanad elections. Photograph: Mark Maxwell/Maxpix

Fine Gael voters ignored a Seanad election appeal by the Taoiseach to vote for female candidates, with no party women elected to three of the five vocational panels counted to date.

The poor showing of women in the election is expected to result in a number of women becoming Taoiseach’s nominees if Fine Gael forms the next government, as part of efforts to meet the increased 40 per cent requirement for female candidates in the next election.

Two of the party’s four outgoing Senators, Gabrielle McFadden from Westmeath and Maria Byrne from Limerick, have lost their seats. Senator Maura Hopkins stood down for family reasons and Senator Catherine Noone is seeking re-election to the Industrial and Commercial panel. Ms Noone became embroiled in controversy over remarks she made and subsequently apologised for about the Taoiseach and autism.

In a letter to TDs, Senators and councillors ahead of voting, Leo Varadkar asked voters “to consider gender balance in how you vote. If you are not giving at least four of your 10 first and second preferences to female candidates, there is something wrong.

The party had already faced criticism when former TD Kate O’Connell was not selected as a candidate. Her sister Mary Newman Julian was candidate on the Cultural and Educational panel but did not get elected.

Former TD Áine Collins is seeking election to the same panel, as is Cllr Sharon Tolan in Co Meath and Linda O’Shea Farren, while Cllr Emer Currie from Mr Varadkar’s Dublin West constituency is a candidate on the Administrative panel, to be selected on Friday.

Third-placed Senator Alice Mary Higgins is in a race against fourth-placed former Solidarity TD Ruth Coppinger, but remained on course to retain her seat.

In the Trinity College constituency Senator David Norris was retained after topping the poll and he was re-elected on the fifth count. Senator Ivana Bacik was elected on the sixth count with transfers from Green Party candidate Cllr William Priestley.

Senator Lynn Ruane is in third and remained some 700 votes ahead of fourth-placed former Irish rugby international Hugo MacNeill.

Meanwhile, more than half of the 43 Senators on the vocational panels have been elected and the first Traveller Senator, Eileen Flynn, was expected to be elected late on Wednesday night.

1 Donald Trump is in trouble, and that could spell very bad news
2 Larger retail stores to reopen on Monday ahead of schedule
3 O’Doherty and Waters ordered to pay legal costs of case against State over Covid-19 laws
4 House parties are being held ‘with abandon’, Holohan warns
5 Taoiseach says €350 pandemic payment to be cut for some part-time workers
Real news has value SUBSCRIBE