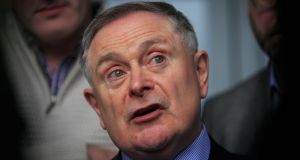 Labour Party leader Brendan Howlin: the Government “now intends to proceed with a proposal rejected by the Oireachtas Committee and must publish and explain its advice for doing so”. Photograph: Gareth Chaney Collins

The Government needs to provide a “clear rationale” for the departure from the recommendation of the Oireachtas Committee on the Eighth Amendment, the Labour leader Brendan Howlin said.

While he welcomed the decision to hold a referendum, he said: “I have concerns about the Government’s decision to depart from the Oireachtas Committee’s proposal for repeal simpliciter”.

Attorney General Séamus Woulfe had advised the Cabinet against straightforward repeal, known as “repeal simpliciter”, and said an enabling provision should also be inserted in the Constitution.

The provision, which would state that the Oireachtas has the power to legislate for abortion, is necessary as it would provide greater legal certainty and minimise the risk of a successful legal challenge, Mr Woulfe said.

Mr Howlin said the Government “now intends to proceed with a proposal rejected by the Oireachtas Committee and must publish and explain its advice for doing so”.

People Before Profit TD Brid Smith said the Cabinet should opt for “a simple referendum” to repeal the Eighth Amendment from the Constitution.

The National Women’s Council of Ireland (NWCI) said it welcomed the Government’s commitment to hold a referendum on the Eighth Amendment.

Orla O’Connor, director of the NWCI, said the Eighth Amendment is “a fundamental barrier to ensuring women and girls access to the healthcare services they need”.

The Life Institute said the Government’s decision to hold a referendum is an extreme proposal that places the rights of the unborn in the hands of fickle and poll-driven politicians.

“The public are not voting for an abortion law just for 2018, but for 2028, 2038, and beyond. If this proposal is passed, we will never be given a say over the rights of the unborn again, because politicians will have nobody to answer to except an avowedly pro-abortion media,” a spokeswoman said.

The Pro Life Campaign said the Government announcement on the Eighth Amendment was “as bad as anyone could have envisaged: the removal of legal protection from unborn babies and providing for abortion on demand”.

Dr Ruth Cullen, it’s spokeswoman said: “It is a very sad and serious moment for our country. Tonight, the Government brought forward a proposal that for the first time in our history would withdraw basic human rights from a group of vulnerable defenceless individuals instead of strengthening their constitutional protections. They can’t disguise the fact that what’s being proposed is solely about stripping unborn babies of all meaningful legal protections.

“The right to life is an inalienable right. It’s not something that can be conferred or withheld by the State at its pleasure. The Eighth Amendment acknowledges this basic right to life; it doesn’t claim to be its initiator - merely its protector”.

She said that in coming weeks it will become clear that the Government’s proposal would lead to abortion on demand if voted for in the referendum. “As people come to realise this, I have every confidence they will vote to retain the Eighth Amendment with a renewed commitment to building a more welcoming society for expectant mothers and their unborn babies.”

Amnesty International Ireland said the Government’s decision is “a further sign of real political will to put women’s and girls’ bodily autonomy firmly at the centre of abortion law reform”.