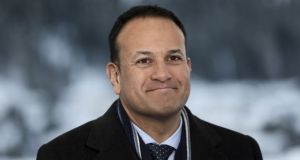 Abortion referendum: there are good political reasons for the elaborate choreography and slow pace of unfolding the proposal. Photograph: Bloomberg

This evening’s special Cabinet meeting, expected to formally signal the Government’s commitment to liberalising Ireland’s laws on abortion, is more an exercise in political choreography than one in executive decision-making.

The meeting, due to begin at 5.30pm at Government Buildings, will be asked to make three formal decisions: to approve the holding of a referendum by giving Minister for Health Simon Harris the go-ahead to draft a referendum Bill; to decide whether the proposal to be put to the people will be simply to delete the Eighth Amendment from the Constitution or to repeal the constitutional ban on abortion by replacing the Eighth with a provision enabling the Oireachtas to legislate for abortion; and to give Harris approval to draft a Bill to legalise abortion should the referendum be passed.

But all of these decisions have effectively been made already.

We know there is going to be a referendum in May or June, assuming the Dáil and Seanad vote for one. (It is the Oireachtas, not the Government, that decides to hold a referendum.) Even if no formal Cabinet decision has yet been made, the intention of the Government is clearly to proceed with one.

Put it this way: is it imaginable that the Government would announce tonight that it has decided not to hold a referendum?

It has also been well established and well leaked that the advice of Attorney General Séamus Woulfe is to replace the existing article 40.3.3, as the Eighth Amendment appears in the Constitution, with a clause that empowers the Oireachtas to legislate for abortion. Ministers have already been told repeatedly the Attorney General’s advice is that such an enabling clause is the best way to achieve their goal of making abortion legally available. They could, of course, disregard his advice. But presumably Woulfe would have to resign then.

Finally, the Cabinet is expected to approve the drafting of legislation that would follow the passage of the referendum, and that would form the basis of Ireland’s abortion laws were the country to vote for repeal.

But this legislation has already been in preparation for some time. Officials were asked last year to prepare legislation to cover all possible outcomes from the Oireachtas Joint Committee on the Eighth Amendment of the Constitution. At a Cabinet meeting after Christmas Harris received approval for that work to continue, although only along the lines of the committee’s report. Formal approval is required to produce the heads of a Bill, of course, and then the full text. But the Government has already made its political will on this known.

The last development this evening has also been flagged in advance. Taoiseach Leo Varadkar has repeatedly declined to express his own views on the proposals, telling reporters numerous times that he would await the Government’s decision on the matter before stating his position in public.

But over the weekend he told the BBC that he would support and campaign for Ireland’s laws on abortion to be liberalised in the forthcoming referendum.

Really, we knew this already. There have been enough hints. And in the real world of politics there is little chance that matters would have reached this stage without the Taoiseach’s tacit approval.

Again, consider it this way: could you really imagine the Taoiseach coming out this evening and saying, no, he’s not going to support this proposal?

There are good political reasons for the elaborate choreography and the slow pace of unfolding the referendum proposal. Varadkar, having come from an anti-abortion position himself to now supporting repeal, knows this better than most.

He is seeking to bring as many members of the middle ground with him as he can. All this isn’t aimed at the repealers, who are chomping at the bit to get going; nor is it for the benefit of the anti-abortion campaigners, already camped outside Government Buildings with graphic images of abortions.

It’s aimed at an uncertain middle ground, keen to see change but wary of it, too. That’s who Varadkar will be speaking to tonight. That’s politics.

3 Poolbeg chimneys may have to be encased in fibreglass, says council