CervicalCheck: Varadkar says he is ‘embarrassed’ for health profession 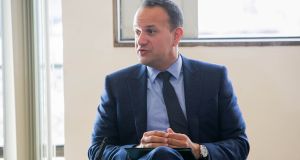 Taoiseach Leo Varadkar has said the CervicalCheck controversy has made him ‘embarrassed’ for his own medical profession. File photograph: Gareth Chaney/Collins

Taoiseach Leo Varadkar has said the CervicalCheck controversy has made him “embarrassed” for his own medical profession.

However, he added that he does not want his criticisms to be “misconstrued” as a blanket condemnation of all of those who work in the health sector.

There is often a culture in the health service, he said, that the health professional knows best.

The Taoiseach made the comments while giving further reaction to the publication of the Scally report into the CervicalCheck controversy.

Dr Gabriel Scally’s report concludes that “a whole-system failure” meant women who had been diagnosed with cancer were not told about subsequent audits which showed their past smear tests were incorrect.

He said the disclosure of the findings of the audits to the women concerned was handled badly and was responsible for much hurt and anger.

“There is an attitude and a culture in our health service, and it goes well beyond CervicalCheck, that the doctor or nurse or midwife or manager or therapist knows best,” the Taoiseach said.

“And that can lead them sometimes to believe they are acting in the interests of the patient when they are actually not. And in the 21st-century, anything, any information that exists about you, you have a right to know.”

He said that reading some of the personal testimonies in the Scally report made him “embarrassed for my own profession, the medical profession.

“But I also know at the same time that there are loads of doctors who act really well, and we even know from this report that some of them did engage in open disclosure, long before this scandal broke . . . in at least 14 cases, open disclosure occurred. The doctor sat down with the patient, offered an apology, explained what happened.”

He added that there is “certainly a degree of misogyny” in some areas of the health sector.

“There is an attitude among some healthcare professionals, and it’s a very old-fashioned attitude, that if something bad has happened it’s okay not to tell the patient because it wouldn’t make a difference anyway and it might just upset them more.

“That’s a really wrong attitude. It’s never the nurses’ or doctors’ or midwives’ decision to make that call.

“This is people’s health, information about their health and they have a right to know this. This goes well beyond CervicalCheck unfortunately, and that’s what really needs to change.

“What now should be done as recommended by Scally is women being offered individual meetings with individual consultants who had the information and didn’t pass it on to offer that apology in person.”

The Scally report includes scathing criticism of the medical profession, with male dominance in the healthcare sector coming in for scrutiny, as the affected women pointed out to Dr Scally that most of the doctors behind the failures to disclose information to female patients were men.

“The point was made that many of the major controversies about maltreatment of patients or denial of reproductive rights in the Irish healthcare system have involved women being damaged,” says the report.

A Northern Irish veteran of the British public health sector, Dr Scally said the screening system was “doomed to fail at some point” due to a “demonstrable deficit” of clear governance and reporting lines between CervicalCheck, the National Screening Service and HSE management.

The review says that a situation where an organisation “can be allowed to impede the speaking of truth to patients in relation to their healthcare is totally unacceptable”.

Vicky Phelan, whose High Court settlement in April exposed the non-disclosure of incorrect smear tests, said the report vindicated the questions she raised about the matter.

“It is time for some people to eat some humble pie and perhaps apologise,” she said on Twitter. “I won’t hold my breath though.”