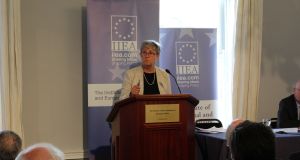 Gisela Stuart, chairwoman of the Vote Leave campaign, speaks at the Institute of International and European Affairs in Dublin. Photograph: Lorcan Mullally/IIEA.

The chairwoman of the Vote Leave campaign has said a no-deal Brexit is not in the interests of either the UK or the EU.

Gisela Stuart also said she believes a solution to the Irish Bborder issue can be found if there is “a political will” to do so .

She was speaking after an address to the Institute of International and European Affairs in Dublin on Wednesday on the theme: ‘Why the Brexit Referendum Result must be Honoured’.

Ms Stuart chaired the Vote Leave campaign and now chairs Change Britain, a pressure group set up after the referendum with the aim of campaigning for a Brexit “which takes back control of our laws, borders, money and trade”.

A native of Germany, she was Labour MP for Birmingham until the 2017 general election and was a parliamentary representative on the convention that eventually lead to the Lisbon Treaty.

European Commission President Jean-Claude Juncker had said earlier on Wednesday that a country that leaves the EU is no longer part of the single market. He also said it is Brexit, not the EU, that risks making the border “more visible” in Northern Ireland.

Asked about her view on the prospect of a no-deal Brexit, Ms Stuart said having no deal “is not in the interests of either side”.

This was “not least because my definition of no deal means no £39 billion divorce”, she said.

She said she also fully accepted the integrity of the single market is “absolute essential” and is what a proper functioning single currency requires.

However, significant problems concerning international trade and tariff regulations and in the context of technology developments mean there is a global problem to be addressed, she said.

The global system has to change and a solution to the NI border issue would be much more likely to be found if approached in that context.

Mr Juncker’s approach on this occasion was not one that was “helpful to finding a solution”, she said.

She was “not entirely sure” that politicians in mainland Europe “fully understand the depth and complexity” of the relationship between Northern Ireland and the UK.

“What history has taught me that you make progress if you quietly come together with goodwill and a preparedness to find a solution,” she said. Statements such as made by Mr Juncker were “creating confrontation when it is neither helpful nor necessary”.

“I’m surprised they seem not to fully appreciate the uniqueness of the relationship and the absolute determination of the British prime minister to ensure the constitutional integrity of the UK and that includes Northern Ireland.”

Earlier, she told the IIEA she is “not Nigel Farage in a skirt” or a “rabid leaver” and said Vote Leave was not linked to Mr Farage or UKIP.

She said 20 years as a Labour MP in a highly marginal constituency had “taught me to listen to voters” and the reasons she had turned against the EU included because it needs “to change dramatically” but had not shown a willingness to do so. A vote to remain would not have lead to change, she said.

The key reason the Brexit result must be honoured was because all the tensions, conflicts and reasons that lead to that result would not be altered by another referendum. Another poll would “deepen divisions and parlayse decision making for even longer”.