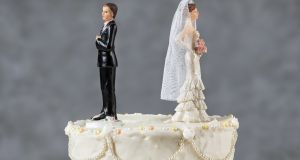 “Divorce is regarded as a normal part of the wear and tear of life.” Photograph: iStock

Family law practitioners broadly support removing divorce from the Constitution in a referendum next year, though one warned that it might be “a bridge too far” for some voters.

They argue that the Government’s expected proposal to reduce the period that an estranged couple must wait before divorcing from four to two years could go further, reducing it to one year.

The Government will hold the first referendum on divorce since it was legalised in a narrow vote 23 years ago on the same day as the local and European elections in late May.

It wants either to reduce the four-year restriction or take divorce in its entirety out of the Constitution.

Minister for Culture Josepha Madigan and Minister for Justice Charlie Flanagan have already had discussions with Fianna Fáil on the issue. The Government has written to Opposition parties to seek a cross-party consensus on a proposal in order that a draft memo can go to Cabinet early next year.

Ms Madigan, a solicitor who specialised in family law before entering politics, has said there may be enough public support for the outright removal of divorce from the Constitution and for the Oireachtas to deal with it in legislation given the groundswell of support to remove the constitutional ban on abortion earlier this year.

Legal professionals welcomed the plan to reduce the restrictive four-year period. They view the measure and the broader divorce regime as a product of the 1980s and 1990s and a reflection of a now obsolete, conservative Catholic country that feared a flood of marriage break-ups and an American-style “quickie divorce” culture.

These fears proved unfounded: statistics show Ireland has one of the lowest divorce rates in Europe.

“Even people who want to do it in the best possible way have this legal cloud hanging over them – it is over but it is not over. If it is two years, it would coincide more naturally when things are getting finalised.”

The main benefit of a reduction would be an end to duplication of legal costs and stress, where people apply for an out-of-court legal or judicial separation when the marriage breaks down and then have to turn to the courts again for a divorce once they have proved they have lived apart for four of the previous five years.

Eilis Barry, chief executive of the Free Legal Advice Centres, said the regime’s “multiplicity of proceedings” was “in nobody’s interests” particularly given the nature of family law casts being “long and drawn out.”

Dublin family law solicitor Marion Campbell described the current regime as “a double-whammy in terms of legal fees and costs”. Most clients do not return seeking a divorce after securing a judicial separation, said Ms Campbell, because they do not want to incur the expense and stress again of returning to court.

The clients who do return willing to reopen the same case again, often with the same level of acrimony, tend to be younger and want a divorce because they want to remarry.

“I don’t see why, if your marriage has broken down, why you can’t get a divorce after one year,” she said.

Ms Walls believes that one year “might be on the short side” but accepts that for some younger people, particularly women in their 30s hoping for children with a new married partner, “waiting a year is enough”.

“I have a lot of clients who are in their 30s and for some reason the marriage has been a disaster and a mistake. Having to wait around for four years for a divorce, they feel completely trapped,” she said.

Family lawyers believe divorce has no place in the Constitution and that it is best left to elected representatives to take decisions and decide what is best for the population.

“Society has changed so much from 1995, but the law has stayed behind,” said family lawyer Keith Walsh.

“The Constitution is the wrong place for it. It was maybe the right place in the ’90s because it had to get changed and it had to get in there, but we should trust our politicians. It is not a hot-button issue any more.”

This view was echoed by Minister for Children Katherine Zappone, who said on a visit to New York: “It should be out of the Constitution and it should be up to the legislators to determine [the waiting period].”

Mr Walsh, who is chairman of the Law Society’s child and family law committee, believes there could be “a little opposition” to removing it from the Constitution and that it might be “a bridge too far” for some. He believes the Government might prefer to back the “less radical” proposal of reducing the waiting period.

“The man in the street doesn’t give a monkeys about that,” he said. “Divorce is regarded as a normal part of the wear and tear of life.”