Martin and McDonald refuse to apologise to Fitzgerald 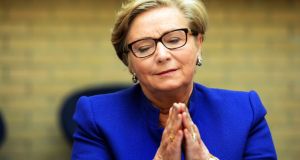 The Fianna Fáil and Sinn Féin leaders have refused to apologise to former minister for justice Frances Fitzgerald after the Disclosures Tribunal report cleared her of any wrongdoing in relation to her handling of allegations about a Garda smear campaign.

Ms Fitzgerald was forced to resign in the political turmoil over the controversy surrounding whistleblower Sgt Maurice McCabe almost a year ago but Mr Justice Peter Charleton’s tribunal report accepted she acted appropriately.

Minister for Health Simon Harris had accused Micheál Martin of “hounding her out of office” and Ms Fitzgerald herself has said she would like an apology.

Mr Martin said “we didn’t hound anybody out of office”.

Asked on RTÉ radio’s This Week programme if he was prepared to apologise Mr Martin said he bore her no ill will and had nothing personal against Ms Fitzgerald.

“It’s very regrettable on a personal level what happened to Frances Fitzgerald, of course. And I never wanted to be in that position last November.”

But he said the Opposition lost confidence in Ms Fitzgerald because vital information was withheld and the Dáil was misled on whether or not she was aware of what was transpiring at the O’Higgins commission.

The O’Higgins commission was was established in February 2015 to investigate and report on allegations made by Sgt McCabe about poor practice in the Cavan/Monaghan division of the Garda Síochána.

Mr Martin said that the Government should be at least as exercised if not more exercised about the main conclusions of the Disclosures Tribunal report than “by their own particular parties’ fortunes and a member of their Government”.

The Fianna Fáil leader said there were links between the controversy which led to Ms FitzGerald stepping down and the resignation of minister for communications Denis Naughten in the withholding of information from the Dáil.

He said Dáil questions from Labour TD Alan Kelly about the Garda smear allegations should have been answered fully. He said information was withheld from both the Dáil and the tribunal and only provided when the Taoiseach ordered a trawl of documents within the Department of Justice.

“The Dáil should be treated up front and with respect and full transparency,” he said.

Sinn Féin leader Mary Lou McDonald who had repeatedly called for Ms Fitzgerald to resign, said “it was not a personal attack”.

She said politics was about accountability and the system had gone catastrophically wrong, failing Sgt McCabe. “The political system has to be answerable.”

She said last year the record of the Dáil had had to be corrected on five separate occasions because of partial, incorrect or incomplete information.

Apologies were necessary but were due to “the injured party, Sgt Maurice and Lorraine McCabe and their family and it is An Garda Síochána, the Department of Justice, the current Minister for Justice Charlie Flanagan and previous ministers for justice who owe an explanation and apology to that man and his family”.

Asked whether officials in the department should also apologise to Ms Fitzgerald for failing to disclose emails to the tribunal, Mr Flanagan said “my conclusion is that the Department of Justice comes reasonably well out of that”.

He said there was a “rather frenzied pursuit of a head” and he pointed to the report’s conclusions about “politicians and commentators in a rush of judgment”.