Cabinet to meet informally at Farmleigh to discuss Brexit 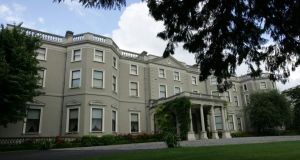 The informal meeting of the Cabinet at Farmleigh House will be “a good opportunity to take stock and focus on broader issues”, a Government spokesman said. Photograph: Eric Luke

Ministers will meet at Farmleigh House on Monday evening for an informal Cabinet meeting over dinner where they will discuss Brexit as the process enters a crucial 10-day period culminating in next week’s votes in the House of Commons.

The Government spokesman said it was “a good opportunity to take stock and focus on broader issues” but declined to be drawn on whether Ministers would discuss the clarifications and assurances sought by London on the Border backstop.

UK and European Union negotiators are seeking to reach agreement on the text of the assurances, which may be contained in a standalone document to sit alongside the withdrawal treaty.

However, there is no agreement yet on a mechanism or a text that reconciles the requirements of the two sides, though intensive discussions are likely to resume this week in Brussels.

The House of Commons is due to hold a series of votes next week, on the existing withdrawal treaty (with or without the new assurances on the backstop sought by the British), on ruling out a no-deal Brexit and on a possible extension of article 50, now widely expected in both London and Brussels.

If British prime minister Theresa May is to have any chance of securing parliamentary assent for the withdrawal treaty in the vote next week, agreement on the backstop assurances is required in the coming days.

Meanwhile, Minister for Business Heather Humphreys has announced that an emergency loan fund for businesses suffering cashflow problems because of Brexit has been increased from €20 million to €200 million.

“It’s for companies that get into serious difficulties and they need rescue and restructuring,” she told the Sunday Business Post. “Generally it would be liquidity problems.”

Her department will also urge businesses on Monday to make sure they are ready to avail of the customs Transit procedure for moving goods through the UK landbridge post-Brexit.

The Transit procedure allows goods to pass across customs borders with all duties and other charges suspended until arrival at their destination.

“In order to avail of the Transit procedure, businesses will need to have a Revenue-approved comprehensive financial guarantee in place. This comprehensive guarantee is required as financial security to cover all potential and actual customs debts such as customs and taxes,” the department said.

As political uncertainty continued in Westminster, the British Labour party’s shadow chancellor John McDonnell said it would whip its MPs to back a second Brexit referendum rather than offer a free vote.

It is a move senior Labour backbencher Caroline Flint warned could lead to the rebellion of up to 60 MPs.

Mr McDonnell said it would be common practice to see MPs whipped to support party policy, but said he understood the difficulties such a decision could pose for MPs in pro-Leave constituencies.