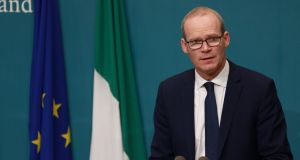 Minister for Foreign Affairs and Trade Simon Coveney speaks about the publication of the Bill. Photograph Nick Bradshaw for The Irish Times

The Government published legislation on Friday to prepare for a possible no-deal Brexit that the Tánaiste Simon Coveney has said he hopes will not be needed and will “sit on the shelf.”

The main parts of the Omnibus Brexit Bill are the following :

Part 1 – Preliminary and General
• Providing for the commencement of the different Parts of the Bill by the relevant Ministers on such day and time as is appropriate.

Part 2 – Arrangements in relation to Health Services
• In the event that the UK leaves the EU on 29 March 2019 without a withdrawal agreement in place, it is necessary to put in place legislative provisions to enable essential Common Travel Area healthcare arrangements, including reimbursement arrangements, to be maintained between Ireland and the UK.

Part 3 - Amendment to Industrial Development Acts 1986 to 2014
• Designed to limit the negative effects Brexit could have on vulnerable enterprises by giving Enterprise Ireland extra powers to further support businesses through investment, loans and RD&I grants.

Part 4 – Amendment of Electricity Regulation Act 1999
• Ireland’s all-island Single Electricity Market (SEM), which was established in 2007, has delivered an efficient, competitive and secure market for customers in Ireland and Northern Ireland. The purpose of Part 4 is to allow the Commission for the Regulation of Utilities (CRU) to quickly modify licences of Irish-based participants in the wholesale electricity market on a temporary basis in the event of a no deal Brexit and in order to ensure that any issues of non-compliance with EU law can be addressed.

Part 5 – Amendment of Student Support Act 2011
• Eligible students studying in the UK and UK nationals studying in Ireland, currently qualify for SUSI grants by virtue of the fact that the UK is a Member State of the EU. The purpose of Part 5 is to make sure that, even after the UK leaves the EU, these arrangements can continue to apply to eligible Irish students studying in the UK, as well as the payment of SUSI grants to UK students in Irish higher education institutions.

Part 6: Taxation
• Part 6 provides for the modification of Income Tax, Capital Tax, Corporation Tax and Stamp Duty legislation in order to ensure continuity for businesses and citizens in relation to their current access to certain taxation measures including reliefs and allowances.

Part 7 – Financial Services: Settlement Finality (Third Country Provisions)
• The purpose of this Part is to introduce legislative amendments to support the implementation of the European Commission’s equivalence decision under the Central Securities Depositories (CSD) Regulation and to extend the protections contained in the Settlement Finality Directive to Irish participants in relevant third country domiciled settlement systems.

Part 8 – Financial Services: Amendment to the European Union (Insurance and Reinsurance) Regulations 2015 and the European Union (Insurance Distribution) Regulations 2018
• This Part of the Bill provides for a temporary run-off regime, which, subject to a number of conditions, will enable UK insurance undertakings and intermediaries to continue to fulfil contractual obligations to their Irish customers for a period of three years after the date of the withdrawal of the UK from the EU.

Part 10 – Third Country Bus Services
• The purpose of this Part is to provide on a precautionary basis for a regulatory regime in relation to bus and coach passenger services between Ireland and a country which is not part of the EU.

Part 11 – Amendments to the Social Welfare Consolidation Act 2005
• This Part enables the Minister for Employment Affairs and Social Protection to make orders with regard to arrangements with other States. The Department of Employment Affairs and Social Protection has finalised an agreement in the field of social security with the UK under the Common Travel Area, which effectively provides for the continuation of current arrangements post Brexit.

Part 13 – Amendment of Extradition Act 1965
• In the event of a no deal Brexit the European Arrest Warrant system will cease to apply to the UK. This Part provides for the maintenance of arrangements in relation to extradition of citizens between Ireland and the UK under the 1957 Council of Europe Convention on Extradition.

Part 14 – Immigration
• These provisions amend the Immigration Act 1999 and 2003 to confirm that immigration officers, in considering removing or deporting a person from the State, have, in line with EU and international obligations, the power to undertake refoulement consideration.

Part 15 – Miscellaneous
• This Part provides that the term ‘Member State’ where used in any enactment shall be interpreted as including the UK for the duration of any transition period, in the context of a withdrawal agreement between the UK and the EU being ratified by the UK.