Employees would begin by contributing 1% of salary to the scheme, matched by employers 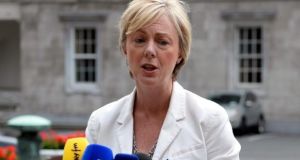 Private sector workers with no pensions provisions will be automatically enrolled into a new Government-backed scheme to ensure they have adequate savings for their retirement.

Minister for Social Protection Regina Doherty will ask Cabinet on Wednesday to approve an auto-enrolment scheme for private pensions. Workers without pension plans will be automatically enrolled into the scheme and have deductions taken from their salary. The deductions will be modest to begin with but will increase each year. Workers will have the choice of opting out of the scheme, if they wish.

The long-awaited reform is to address what has been described as a demographic “time-bomb”. Only a third of private sector workers in Ireland have pension plans and the ratio of workers to pensioners is set to fall from 5:1 today to just over 2:1 by mid-century. By that stage, the universal State pension will put huge strains on the public finances while not being sufficient to meet the needs of pensioners.

Last year, the Government published a plan for pension reform. It held a public consultation and commissioned an academic study on the impact of the new opt-out scheme. Under the August 2018 proposals, employees would begin by contributing 1 per cent of their salary to the scheme, matched by employers. This would incrementally increase by 1 per cent each year to six per cent from both employer and employee after six years. At that stage, the State would contribute a further 2 per cent.