Byelection to replace Barry McElduff to be held on May 3rd 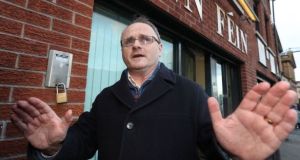 Barry McElduff posted a clip of himself in a shop balancing a loaf of Kingmill bread on his head. This was interpreted by the families of some Kingsmill massacre victims’ and others as an insult. File photograph: PA Wire

A Westminster by-election to replace former Sinn Féin MP for West Tyrone Barry McElduff is to take place on May 3rd.

A by-election is taking place following the resignation of Mr McElduff in January after he posted a controversial video on Twitter. On January 5th, the 42nd anniversary of the Kingsmill massacre — an IRA attack that left 10 people dead — Mr McElduff posted a clip of himself in a shop balancing a loaf of Kingmill bread on his head. This was interpreted by some victims’ families and others as an insult.

On January 8th, Mr McElduff was suspended by Sinn Féin for three months. On January 15th, his resignation was formally submitted to Westminster. Mr McElduff maintains he never intended to cause offence.

At the time, he said the “deep and unnecessary hurt” the video caused the families of the victims was his greatest regret.

West Tyrone is a very strong seat for Sinn Féin. At the 2017 Westminster election Mr McElduff received 50.7 per cent of the vote to win the seat which had been held by former Sinn Féin vice-president Pat Doherty from 2001.

In the fallout of the tweet controversy, UUP leader Robin Swann called for a non-partisan, cross-community candidate to run in any by-election to act as a voice for victims.