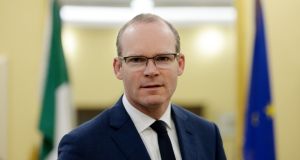 Minister for Foreign Affairs Simon Coveney spoke to the British secretary of state for Northern Ireland Karen Bradley on Thursday night and the two agreed to meet in Belfast after April 10th. Photograph: Alan Betson

The Irish and British governments are to launch another push to re-establish the powersharing institutions at Stormont.

The move will follow celebrations in Belfast next week marking the 20th anniversary of the Belfast Agreement.

Minister for Foreign Affairs Simon Coveney spoke to the British secretary of state for Northern Ireland Karen Bradley on Thursday night and the two agreed to meet in Belfast following the events on April 10th.

Sources in Dublin said the two governments would mount another push to have the Executive and the Assembly, which have now been in suspension for over a year, restored.

However, they acknowledged no progress was likely until the DUP leader Arlene Foster gave her evidence to the inquiry into the Renewable Heat Incentives.

Ms Foster’s evidence is due in the days after the agreement anniversary, on April 12th and 13th.

Under an intergovernmental conference, the Irish Government can have an input in non-devolved matters relating to the North.

Mr Coveney raised the issue of the conference with Mr Bradley in the phone call, but the British government has so far been non-committal.

Nonetheless officials hope that the events to mark the anniversary of the agreement could give a new impetus to the efforts to secure agreement on the return of the Stormont institutions.

However, some senior Irish officials are sceptical of London’s commitment to a fresh round of talks, given the British government’s current preoccupation with Brexit.

Former US president Bill Clinton is expected to be in Belfast for the events, as will the former talks chairman George Mitchell and former taoiseach Bertie Ahern.

During his visit to the US for St Patrick’s Day, Taoiseach Leo Varadkar proposed “a new engagement with the British government . . . to secure an agreement between the major parties and also all the parties in Northern Ireland”.

Perhaps the best way to do this would be “joint proposals” or a “joint paper” from both governments, the Taoiseach said, before adding: “Whether it is done through the auspices of the British-Irish governmental conference or not is not the most important thing.”