British annoyed at not being consulted over ‘Facts about Ireland’ booklet 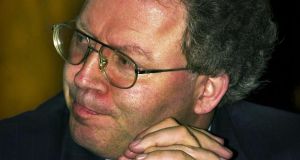 David Donoghue, who served as Irish head of the Anglo-Irish secretariat between 1995 and 1999. Photograph: Eric Luke

As taoiseach John Bruton was making a statement to the Dáil reassuring unionists about his commitment to the principle of consent and condemning an IRA attack as “fascist”, Irish and British officials were arguing over whether it was insensitive for Dublin to include a chapter on Northern Ireland in an official publication.

Newly declassified files show that British joint secretary Peter Bell objected to the Facts about Ireland booklet at a meeting in October 1996.

The British had been approached for images to include in a CD-ROM version of the publication, which was distributed by the Department of Foreign Affairs across its diplomatic network.

Bell said the British side “considered it strange that the Irish side had not formally consulted them” about the booklet. Whilst he acknowledged the Northern Ireland chapter was “broadly speaking, low-key and factual”, he added that “many in Northern Ireland would regard its very existence in an Irish government publication as insensitive”.

The British official also pointed to “a number of factual inaccuracies, in particular with reference to Northern Ireland departments, and the Royal Irish regiment”.

According to the British confidential note, the Irish joint secretary David Donoghue retorted that “on the contrary, the Irish side found it odd that the British side should be raising for the first time concerns about a booklet which has been in existence for 20 years... The Irish side totally rejected any suggestion of the Northern Ireland chapter being intrinsically insensitive. The book was a factual manual designed to inform an international audience of the political, economic, and cultural life of Ireland, which inevitably would cover the history of Northern Ireland.”

Bell explained that “the British side considered it a little discourteous that a friendly neighbouring government did not consult on matters of mutual concern or for confirmation of factual information about a part of the United Kingdom, which should be to the benefit of the Irish side”. Mr Donoghue responded, insisting “that the Irish side saw no reason to consult the British side on the history of Northern Ireland, and therefore disagreed that the Irish side was being discourteous or unfriendly in any way.”

The British notetaker Ruth Osborne described the encounter as “an unusually unfriendly meeting reflecting in large measure a continuing failure on the Irish side to appreciate non-nationalist sensitivities”. British officials felt the Irish civil servants’ mood had gone “sharply downhill” after they were informed that the Presbyterian moderator had been unhappy about visiting them at their Anglo-Irish secretariat in Maryfield and “reached bottom with the total rejection of the suggestion that the British side should have been consulted about the Facts about Ireland chapter on Northern Ireland”.

Osborne commented that “it was a little ironic that these discussions were taking place more or less at the same time that the Taoiseach was delivering a speech in the Dáil, which attempted to reassure unionists of the Irish side’s stance on the principle of consent, and so soon after the Thiepval bombing”, the IRA attack on the British Army’s HQ in Northern Ireland which took place on October 7th, three days beforehand.

Separately, British officials made it clear to their Irish counterparts that they regarded Mr Bruton’s speech condemning the Thiepval attack as “very helpful and supportive from a number of points of view”.