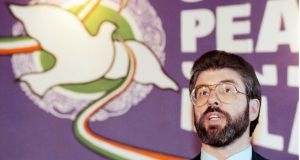 A private memo in February 1997, just released into the British archives, advised Major about the publication of an article by the then Sinn Féin leader in The Irish Times that month.

Downing Street and Adams were secretly trading questions and answers with each other at the time through John Hume – each seeking assurances of the other – in an attempt to get the IRA to renew its ceasefire and Sinn Féin into all-party peace talks.

The memo to Major, from his private secretary and diplomatic adviser John Holmes, says the Adams article, in which he outlined his party’s position on a political settlement, was a “big story in Dublin” and likely motivated by outrage over the shooting dead of British soldier Stephen Restorick in Co Armagh.

Hume had also penned a hard-hitting article in the Irish News weeks beforehand on the need for a ceasefire.

Holmes tells Major in the memo, marked confidential, that Adams appeared to be putting “greater emphasis on the need for, and possibility of, a new ceasefire than in recent months”.

“Adams is trying to get back on the PR front foot, and throw the ball back into our court,” he told the prime minister.

Holmes also notes recently received answers from Adams were “very much the same language” as in the article.

Sinn Féin had told the Irish government the article was “of great significance”, he had been advised by Dublin, while “hints about the possibility of an early ceasefire have again begun to appear, including from Hume”.

The piece prompted a revision of another article Major was working on at the time – to be placed in newspapers in Belfast, Dublin and the United States – about the futility of violence.

Holmes said this would now be scrutinised for responses to Adams’ article.

“It would be easy to include a sentence or two which sound not too negative, without saying anything new, to keep the PR advantage,” he advised.

In a hand-written note on top of the memo, Major wrote: “Clever little devil, isn’t he? But is it genuine?”

Separately, a memo of a phone call between Major and then US secretary of state Madeleine Albright on February 19th that year shows the prime minister warned her the “military wing” of the republican movement was “aching to do more damage and was probably capable of doing so”.

Major said “we have escaped the worst so far through a combination of good luck and effective security work”.

“The truth was that Adams did not trust the British government,” he said.

“[Adams] believed that we would always move the carrot out of reach at the last minute. This was not true.”

Major said both sides needed to “make a leap of faith to break the present stalemate”.