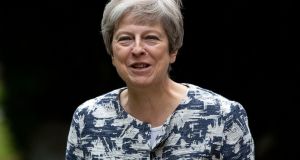 Theresa May is hoping to conclude a divorce deal and broad outline of a future trade agreement with the EU in October. Photograph: Steve Parsons/PA Wire

Bank of Ireland has said its “economic pulse” reading of the mood of Irish households and businesses declined in August amid growing fears of a no-deal Brexit as the UK enters a crucial stage of talks with the European Union.

The bank’s combined index reading for the consumers and businesses fell 2.3 points on the month and 0.6 year-on-year to 91.3 in August, with increased sterling volatility adding to businesses concerns in the past month.

“The economic pulse was down for the second month running in August. Similar to last month, this doesn’t come as a great surprise and owes much to Brexit uncertainty, which is high at the current juncture,” said Loretta O’Sullivan, chief economist at Bank of Ireland.

While British prime minister Theresa May is hoping to conclude a divorce deal and broad outline of a future trade agreement with the EU in October, concerns are mounting in London and Brussels that the UK may end up crashing out of the union next March with no deal.

“This is weighing on sentiment and also impacting currency markets,” said Ms O’Sullivan of the fall in the value of sterling to 90p from 88p in the past two months. “This is a concern for Irish businesses selling into the UK market and is something that we will be keeping a close eye on as the talks enter the crucial autumn phase.”

Input costs also remained a pressure point for many businesses in August, according to the bank, with over two in five firms in the industry and services sectors, one in three retailers and almost two thirds of builders reporting an increase in costs excluding labour in the past three months. Nonetheless, the majority expect to keep their near-term selling prices the same.