Budget 2020 will be based on no-deal Brexit – Donohoe 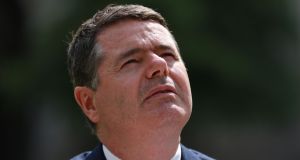 Minister for Finance Paschal Donohoe is expected to tell the Cabinet today that he intends to prepare the forthcoming budget on the basis that there will be a no-deal Brexit on October 31st.

The move comes amid a fresh warning from the State’s financial watchdog that Brexit could leave a major hole in the Government’s budget, requiring it to cut spending or raise taxes.

The Irish Fiscal Advisory Council said a “large budget deficit” could emerge in the wake of a no-deal Brexit due to falling taxes and rising unemployment-related costs.

Mr Donohoe’s decision to make no-deal the basis for the budget will severely constrain any extra giveaways next month as Mr Donohoe seeks to stress caution amid global trade tensions and continuing uncertainty over the UK leaving the European Union.

The decision also reflects the Government’s bleaker outlook on Brexit since Boris Johnson became UK prime minister. However, Mr Johnson’s visit to Dublin this week has given rise to some optimism that a deal could yet be reached before the end of next month.

Mr Donohoe has repeatedly said that the Government would make a judgment in advance of the budget as to whether it should be prepared on the basis of a Brexit deal or none. He is now understood to be ready to make the call weeks ahead of his October 8th budget speech.

The decision – which may be ratified by the Cabinet at its weekly meeting today – will not affect the numbers outlined in the summer economic statement, which provided for a budgetary expansion next year of €2.8 billion, of which some €2.2 billion is already pre-committed to spending plans.

Insiders say the decision to go for a no-deal budget will assist Mr Donohoe in dampening demands for extra spending.

Senior Government figures believe the most difficult aspect of the budget process will be planning how to allocate funds for no-deal Brexit contingencies, such as supports for hard-hit sectors.

Sources said Mr Donohoe would lay out a number of “indicative ranges” in his budget speech on the amount of money needed to protect areas that would be impacted in the event of the UK crashing out of the EU without a deal. It will not be possible, it is suggested, for Mr Donohoe to be more specific on no-deal spending at that point.

The Dublin Central TD held his first budget meeting with Fianna Fáil’s Michael McGrath and Barry Cowen yesterday, although it was mostly a broad discussion of the State’s current financial position.

In the event of a no-deal Brexit bringing additional costs to the Exchequer and hitting tax revenues, the Government will not cut spending or raise taxes next year, but will instead increase borrowing.

Insiders say the decision to go for a no-deal budget will assist Mr Donohoe in dampening demands for extra spending as the Government stresses a prudent approach for both economic and political reasons.

There is a belief among Fine Gael ministers that the party must rebuild a reputation for economic prudence, which took a battering on as the costs of the National Broadband Plan and the National Children’s Hospital ballooned.

Senior Ministers believe the budget is an opportunity to communicate a message of sensible economic management to the public, but others are pressing for giveaways in what is expected to be the last budget before a general election.

Taoiseach Leo Varadkar earlier this week held a dinner for the Cabinet to mark the beginning of the Dáil term, and told his ministers he wants the general election to be held in May.

The Irish Fiscal Advisory Council has previously accused the Government of mismanaging the public finances and failing to keep spending in check while using temporary corporation tax receipts to paper over the cracks.

“Repeating the pattern of slippages would be inappropriate,” the council said, warning it could add further overheating pressures to the economy.

“If spending overruns occur, the Government should find offsetting savings in other areas,” it said. “It should not rely on further surges in corporation tax receipts, which could prove unsustainable, to fund slippages.”

The council said Government revenues have been boosted by “unexplained” corporation tax and a strong bounce back in the economy.

“These gains are likely to prove temporary,” it said.