‘Here’s a fact about the Irish border. There are approx 100 lorries per day’ 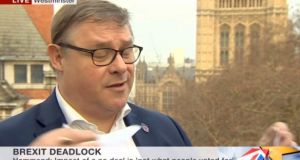 Brexit is the gift that keeps on giving for satirists and provides much needed levity given the seriousness of the issues. If the consequences of it weren’t so serious and far-reaching, it might even be funny.

The list of Brexit-related gaffes by politicians and commentators is growing by the day as the stakes get higher and the deadline gets closer. The following list is by no means exhaustive and will be added to as March 29th approaches. Send an email to rmcgreevy@irishtimes.com if you want to suggest an addition.

“Brexit has brought us to a great moment in our history. A moment when we must strengthen our global presence, enhance our lethality and increase our mass” - is British defence secretary Gavin Williamson intending to declare war on the EU? - February 10th

“Oh we must have forgotten that paragraph” - UK Labour party source saying leader Jeremy Corbyn had “forgotten” to include a pledge for a second referendum in a letter he sent to British prime minister Theresa May. The pledge was inserted in a draft written by shadow Brexit secretary Keir Starmer, but did not make it into the final letter- February 9th

“We fought in the Second World War. We liberated  France, we liberated  Belgium. We beat the Germans. And what we got now?

“I believe in heaven and not in hell, apart from what I’m doing now, which is hell” - European Commission president Jean Claude Juncker responds to Donal Tusk - February 6th.

”I’ve been wondering what that special place in hell looks like, for those who promoted Brexit, without even a sketch of a plan how to carry it out safely” - European Council president Donald Tusk socks it to the Brexiteers. Not the most diplomatic of statements - February 6th

“Here’s the problem. The backstop is not a device to solve a genuine border problem, but a political weapon to shore up a minority Irish government, open the door to a united Ireland and punish us for daring to leave the EU.” - Sir Christopher Meyer, former British ambassador to the United States - February 4th.

“We have a centuries-old tradition of smuggling (‘brandy for the parson, baccy for the clerk’), and are ready to set out in our little ships to Dunkirk or wherever and bring back luscious black-market lettuces and French beans, oranges and lemons” - The Spectator columnist Charles Moore suggests a novel way to feed 65 million people pro-Brexit - February 2nd

“Britain helped to liberate half of Europe. She mortgaged herself up to eye balls in process. No Marshall Plan for us only for Germany. We gave up war reparations in 1990. We put £370 billion into EU since we joined. Watch the way ungrateful EU treats us now. We will remember.” - Tory MP Daniel Kawczynski neglects to remember that Britain was the largest recipient of Marshall Aid after the Second World War. He failed to delete the tweet though thousands point out his error. He hung up on a radio host who challenged him about it - February 2nd.

“We are in fact at war. It’s a struggle for domination of one state over another” - Dr Max Gammon takes the martial metaphors on Brexit to another level. January 31st.

“Well, there are others already in Europe who are saying differently that they are, that they believe that they need to listen to the prime minister.”

“It’s somebody I can’t pronounce is the answer, but I can find out for you”.

“Here’s a fact about the Irish border. There are approx 100 lorries per day crossing the ROI and NI border. This accounts for 0.5 per cent of UK/EU trade. One company accounts for 50 per cent of these trips - that company is Guinness. And this is the false premise that is holding up Brexit” - UKIP leader Gerard Batten MEP could merit a column on his own of gaffes. Here’s one of his better ones from a tweet. The actual figures are 177,000 lorries a month (almost 6,000 a day) and 208,000 vans (almost 7,000 a day) - January 30th.

Lady Sylvia Hermon to Dominic Raab: “Since you had such a critical role as the Brexit Secretary, I presume you have read the Belfast Agreement”.

Raab: “I haven’t sat down from the beginning and went through it. It’s not like a novel where you sit down and you say ‘do you know what, this is a cracking read’.”  - January 30th.

“We fought in the Second World War. We liberated France, we liberated Belgium. We beat the Germans. And what we got now? Trying to tell us what we can and can’t do” - Barnsley resident Danny Gillespie on the BBC Newsnight programme - January 29th.

“There has to be an argument, doesn’t there, that says instead of Dublin telling this country that we have to stay in the single market etc within the customs union, why doesn’t Dublin, why doesn’t the Republic of Ireland, leave the EU and throw in their lot with this country?” - John Humphrys (again) proposing that Ireland forsakes its independence for the sake of Brexit - January 26th.

A hard border “may involve the need, for example, for cameras, physical infrastructure, possibly a police presence, or an army presence to back it up” - Taoiseach Leo Varadkar scaring the living daylights out of people while speaking in Davos - January 25th.

“My father, Reginald François, was a D-Day veteran. He never submitted to bullying by any German. Neither will his son. So if Mr Enders is watching, that’s what he can do with his letter” - Tory MP Mark François does mention the war when responding to Airbus chief executive Tom Enders warning about a no-deal Brexit - January 25th.

“Many people listening to you this morning might think that you are treating us all as if we we’re stupid” - RTÉ Radio 1 presenter Audrey Carville to Minister for Agriculture Michael Creed who fails on 15 occasions to answer how a hard border would operate - January 23rd.

“I would anticipate there would be checks” - Minister for Transport Shane Ross says the unsayable about what might happen to lorries in the event of a no-deal Brexit. “Well, no,” responded Tánaiste Simon Coveney immediately contradicting him - January 15th.

“As someone who lived through the Troubles, we never had a hard border” - DUP leader Arlene Foster gives her border what border? response to the threat of a hard border - January 10th.

“This paper appears to show the government were well aware that Ireland will face significant issues in a no-deal scenario. Why hasn’t this been pressed home during the negotiations? There is still time to go back to Brussels and get a better deal.” Tory MP Priti Patel responds to an article in The Times of London that there might be food shortages in Ireland as a result of Brexit - December 7th, 2018.

“I hadn’t quite understood the full extent of this, but if you look at the UK and look at how we trade in goods, we are particularly reliant on the Dover-Calais crossing” - the then Brexit secretary Dominic Raab was shocked, shocked to find that the shortest route across the English channel was also the busiest - November 8th, 2018.

“We have a reciprocal agreement where I can go to Ireland and ask for an Irish passport, and someone from Ireland can come to the UK and ask for a British passport” Tory MP Andrew Bridgen - October 16th, 2018.

“I didn’t understand things like when elections are fought for example in Northern Ireland - people who are nationalists don’t vote for unionist parties and vice-versa” - Northern Secretary Karen Bradley is surprised to find voters in Northern Ireland vote along sectarian lines - September 8th, 2018.

“If you listen to Bertie Ahern, if you listen to Enda Kelly - these are two former Taoiseachs, prime ministers of Northern Ireland - they haven’t quite played ball like the present Irish Prime Minister.” Brexit MP Bernard Jenkins on Sky News. He also called Enda Kenny Enda Kelly in a later interview that day - December 4th, 2017.

“There is a presidential election coming up. The present government is feeling very worried about Sinn Féin. There is a great bit of showboating going on in Ireland.” Former Tory leader and leading Brexiteer Iain Duncan Smith demonstrates his profound understanding of Irish politics - November 28th, 2017.

“The United Kingdom, is one of the few countries in the European Union that does not need to bury its 20th century history” - UK Trade minister Liam ‘EU trade deal should be the easiest in history’ Fox on Britain in the 20th century. The peoples of Ireland, India and Kenya might beg to differ with his assessment of British history - March 4th, 2016.