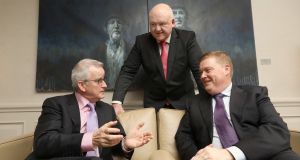 British and Irish Chamber of Commerce director general John McGrane has set out five principles that he says are vitally important in supporting the Irish and British economies as Brexit draws closer.

Addressing a business breakfast as part of the Association of Chartered Certified Accountants (Acca) Business Leaders’ Forum, he said they were a customs arrangement; global trade deals; regulatory equalisation between the EU and UK; dispute resolution; and services.

He said these needed to be part of an overall package for the UK’s withdrawal from the European Union.

“We’re now at a critical juncture in the Brexit process,” said Mr McGrane. “For both the Irish and British economies to grow a strong trading system is required, and these core principles set out a blueprint which will enable the two to work together.

“We urge all those involved in the process to deliver a deal that supports these requirements for businesses in both Ireland and the UK.”