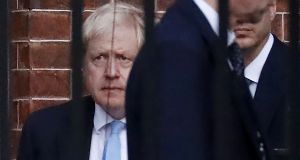 British prime minister Boris Johnson hopes to put the new deal before the House of Commons at a special sitting on Saturday. Photograph: Getty

DUP concerns about consent mechanisms in the revised Brexit deal are causing anxiety in Dublin that Boris Johnson may not sign up to a new agreement to allow the UK leave the EU in an orderly fashion.

EU chief Brexit negotiator Michel Barnier on Wednesday night told EU ambassadors that a new deal is close but had not yet been agreed.

A revised Brexit deal is expected to be considered by EU leaders at a meeting of the European Council in Brussels on Thursday and Friday. If approved by the summit, Mr Johnson hopes to put the new deal before the House of Commons at a special sitting on Saturday to pave the way for Britain to leave the EU by the October 31st deadline.

The only outstanding issue between the EU and UK is how VAT would be applied in Northern Ireland under new special arrangements for the North.

The new deal would mean Northern Ireland remains part of the UK customs territory but follows EU customs rules to avoid checks on the island of Ireland. Another major element is how the Northern Ireland Assembly would consent to such arrangements.

Senior figures in Dublin said Mr Johnson was still working on Wednesday night to bring the DUP and their hardline Brexiteers allies onside to the outlines of the deal that had been reached with the EU.

However, a source said it is “not clear” if Mr Johnson will sign up to the package without the backing of the DUP and Brexit hardliners whose support is needed to pass any deal through the House of Commons.

A Government source said Dublin may be open to an “opt out” mechanism that would require the consent of unionist and nationalist communities in the North to leave a new Northern Ireland-only protocol. DUP figures have said the consent of both communities must be needed to opt in to any new arrangement.

“If it’s opt out, maybe,” said a well-placed Dublin source. “But they don’t want that.” It was added that the DUP want a veto for unionism but not one for nationalism and their argument is not about seeking the consent of both parties or the Belfast Agreement.

EU diplomats said negotiations would continue through the night.

A 10-minute phone call between Mr Johnson and Taoiseach Leo Varadkar on Wednesday morning produced what sources close to the talks described as a “big move” on the issue of consent.

But DUP leader Arlene Foster and deputy leader Nigel Dodds told Mr Johnson the move did not go far enough, so that talks in Brussels were put on hold while Downing Street continued to negotiate with the DUP.

DUP MP Sammy Wilson earlier said that any arrangement that would see Northern Ireland follow EU regulations for goods and create a de facto customs border in the Irish Sea must be subject to “cross-community consent” under the Belfast Agreement.

“UK and EU negotiators, who have ad nauseam pontificated about the need to respect the agreement, have no business interfering in the processes of consent as currently set out. The government and the EU’s commitment to uphold the Belfast Agreement will soon be put to the test,” he said.