Brexit: May tries to secure support for deal ahead of January 14th vote 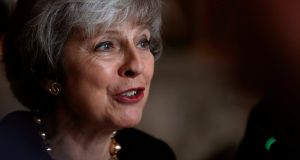 British prime minister Theresa May is seeking to gather support for her Withdrawal Agreement ahead of a crucial vote. Photograph: Reuters

British prime minister Theresa May will continue efforts to win over Tory critics of her Brexit deal as MPs return to Westminster next week, but both wings of the party warned that the plan is unlikely to receive support.

As the Commons returns from its Christmas break, the prime minister is expected to step up efforts to woo potential rebels while working with Brussels on further safeguards to address concerns about the Withdrawal Agreement.

But a significant number of Tory Brexiteers remain opposed to the Withdrawal Agreement and appear relaxed about the prospect of a no-deal scenario with the UK leaving the European Union on March 29th with no transitional arrangements in place.

On the other side of the Tory divide, pro-EU veteran Ken Clarke said Mrs May’s deal - which he would be prepared to support - is “dying” and he would be “amazed” if the mood of MPs had changed over the Christmas break.

Instead, he called for Brexit to be delayed until a way forward can be found.

The prime minister delayed a vote on her Brexit deal last month, with MPs set to resume debate on it on Wednesday ahead of a vote the following week.

She is said to be considering offering MPs further safeguards about the Irish backstop - the measure aimed at preventing a hard border on the island of Ireland which critics fear could leave the UK indefinitely bound into a customs union with the EU and prevent future trade deals with countries around the world.

But former Brexit minister Steve Baker rejected the proposals, saying they were a “tedious and desperate attempt to rescue an unsalvageable deal”.

The Daily Mail reported on Saturday that Mrs May is working on a “double lock” to put a time limit on the backstop.

Officials are reportedly drawing up a possible Commons amendment to the Brexit vote which would give Parliament the right to serve notice to the EU of an intention to quit the backstop after 12 months if Brussels fails to agree a trade deal with the UK that would resolve the issue.

Meanwhile, Mrs May is also seeking a written guarantee from the EU that a trade deal can be agreed within 12 months of the transition period ending.

The Times reported that the prime minister will host Conservative Brexiteers for drinks on Monday and Wednesday as part of a charm offensive.

On Friday, Mrs May had a “friendly” call with European Commission president Jean-Claude Juncker as she struggles to break the Brexit impasse and the pair are expected to keep in touch next week, fuelling speculation about efforts to win further concessions from Brussels ahead of the Commons vote, widely expected to be on January 15th.

The conversation was part of Mrs May’s effort to obtain further written reassurances that the Irish Border backstop in her Brexit deal would never come into force. Downing Street refused to provide any further details of what was discussed.

She is still hoping to obtain additional clarifications over the backstop before MPs vote on the deal in the week of January 14th, although it is not clear what Mrs May can get that would satisfy Tory rebels and the Democratic Unionist Party.

But Brexiteer Sir John told BBC Radio 4’s Today programme he could not support the deal, and added: “Many of us in the country just want to move on and talk about something else, we want to be out and we know it will work just fine.”

As part of the no-deal planning, a major exercise will take place on Monday with up to 150 lorries testing out plans to use Manston airfield near Ramsgate as a mass “HGV holding facility” to alleviate congestion on the roads to the Channel ports.

Meanwhile, a dredger has been seen working in Ramsgate harbour, the port which is proposed as an alternative freight route to Europe if a no-deal Brexit results in chaos at Dover and the Channel Tunnel.

He told Today it was “highly unlikely” Mrs May’s deal would get through Parliament and “we need more time” to agree on how to proceed.

“Nobody can deal with us on the continent until the British have agreed amongst themselves on some sort of consensus.”

He suggested revoking Article 50, the legal notice for withdrawing from the EU, until details of the future relationship sought with Brussels can be agreed - something which could take years.

He warned a no-deal Brexit would be a “car crash” and dismissed the 2016 referendum result as “one opinion poll”.

“If we are insisting that one opinion poll means we have to leave, we have got to minimise the damage,” he said. - Agencies