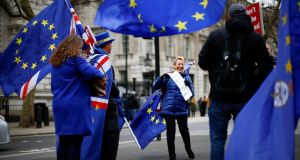 Just under three years ago, as former British prime minister David Cameron and EU president Donald Tusk sat down to negotiate a deal designed to prevent Brexit, Drechsler said he feared a “braccident” – where the UK inadvertently voted to leave Europe while wanting to stay – more than anything else.

Healy, president of the Northern Ireland Chamber of Commerce, warned this week that uncertainty in the British parliament could result in a no-deal Brexit by default, something nobody – except possibly a handful of zealots in Westminster – actually wants.

Drechsler was speaking in Dublin in February 2016, when politicians on both sides of the Irish Sea did not believe that UK voters would opt to leave the EU. However, the CBI president did not only say that any referendum would be tight, he also remarked that the Border would cause unforeseen problems for Ireland north and south.

His “braccident” very much happened. People voted to leave, without knowing what it was they were leaving, creating a mess that had consequences for this country, particularly the North.

The really frightening thing is that British politicians now risk a “no-deal braccident” where, as Healy highlighted, parliamentary indecision could inadvertently force the UK from the EU with no deal, with serious consequences for businesses and workers on both sides of the Border.

Healy says businesses, including the 1,200 his organisation represents, remain in the dark about the trading conditions they will face. “It is now time to put political games to bed,” he says.

He is right. Nevertheless, Westminster politicians have thus far shown they are loath to stop playing games. This month’s vote on the deal struck with Brussels by UK prime minister Theresa May will tell us if that has changed, or if they would rather stumble into braccident number two.