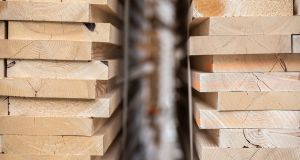 Taoiseach Micheál Martin has warned that there will be no Irish forestry industry by the end of October or November unless legislation before the Dáil dealing with licence appeals is passed. File photographer: Akos Stiller/Bloomberg.

Taoiseach Micheál Martin has warned that there will be no Irish forestry industry by the end of October or November unless legislation before the Dáil dealing with licence appeals is passed.

Mr Martin said jobs in the sector and the supply of timber were under serious threat because of “serial objections on an industrial scale”.

He stressed the need to pass the Forestry (Miscellaneous Provisions) Bill, which reforms the way appeals lodged against forestry licences are handled.

The Taoiseach was speaking as a Dáil row erupted over speaking time on the controversial legislation which has sparked sharp divisions.

Independent TD Mattie McGrath said “tree huggers and tree lovers are holding up the Bill and clogging it up with frivolous amendments”.

But People Before Profit TD Richard Boyd Barrett hit out at big business interests being involved and said they should have “decent jobs instead of bogus self-employment in forestry”.

The forestry industry has said appeals to tree-felling licences are not being dealt with quickly enough, with around 400 understood to be before the Forestry Appeals Committee and decisions coming at a rate of around 20 a month.

The Bill allows the committee to increase in size and hear more than one appeal at a time and to determine appeals without an oral hearing in appropriate cases.

Mr Martin said the legislation was urgent and the issue had been going on for years. “There have been serial objections on an industrial scale, which is not merited and is not fair,” he said.

The Taoiseach said he had no issue with people objecting, which they were entitled to do.

“All that the Bill is doing is aligning the issue of licences in forestry, felling and planting to the conventional planning system,” he said. “It allows for objections still but creates fees for those who want to appeal.”

He said the Bill was “too weak” in the view of some TDs but “it’s probably too strong from somebody else’s perspective”.

“We want to stop people who live in the city objecting to plantations that are 100 miles and 200 miles away. This is scandalous,” he said.

Later introducing the Bill Minister of State Pippa Hackett said there was a crisis in the forestry sector and the appeals system is “overwhelmed”.

Ms Hackett who has responsibility for forestry said the licensing system has required the “most fundamental change” in its history. She added that because of the delays planting of new trees was down 35 per cent compared to last year at 1,941 hectares. The Minister noted that 81per cent of the 9,000 submissions received on the Bill supported the legislation.

Sinn Féin TD Martin Kenny said an effective forestry policy should deliver for the community, the environment and the local economy. Mr Kenny said much of the backlog and the opposition to afforestation “is to forestry policy in general rather than to individual operations”. The Government must clear the backlog in licence applications and appeals, but its second job is to deliver a new forestry policy, he added.