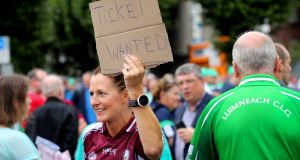 A GAA fan seeks help finding a ticket for the All-Ireland Senior Hurling Championship Final. New laws seek to ban the resale of tickets to live events, matches and concerts in designated venues at a price above face value. File photo: Ryan Byrne/Inpho.

Ticket touts face fines of up to €100,000 and two years imprisonment under new legislation which is being fast-tracked by the Government.

Tánaiste and Minister for Business Leo Varadkar received Cabinet approval to bring forward legislation to ban the resale of tickets to live events, matches and concerts in designated venues at a price above face value.

The measures will apply to events in designated venues with a capacity of 1,000 or more.

However, the Government may apply the laws to venues with a capacity of less than 1,000 if, after consultation with the operator, it is considered to be in the public interest and if there is a belief the tickets could be resold at a profit.

“Touts and reselling websites ruin gigs and matches for everyone, making it harder to get a ticket in the first place and driving up prices,” Mr Varadkar said.

“This is about making sure people aren’t getting ripped off once live events, matches and concerts get up and running again, especially considering numbers are likely to be restricted to begin with.”

Mr Varadkar said there is a specific provision in the Bill for football’s European Championships, games in which were due to be held in Dublin this summer but have now been rescheduled for next year. The provision bans the unauthorised sale of tickets for matches.

“We want to make sure everyone gets a fair shot at getting tickets at face value. This legislation is also hopeful. We’re planning for the time when we can go to gigs, festivals and matches again,” he added.

The legislation will be published by the end of the year.

Secondary ticket sellers selling or advertising tickets for events in the relevant venues will also have to provide information on the original sale price of the ticket or ticket package and the location of the seat or standing area.

There will be exemptions for the sale of tickets on behalf of charitable organisations and amateur sports clubs.

It is expected that the legislation will protect the right of ticket holders to sell a ticket for a price at or below the original cost.

A Private Members’ Bill on the same issue was originally brought forward by the then Fine Gael TD Noel Rock and Fianna Fáil’s Stephen Donnelly in 2017, which was supported by the previous government and all parties early last year.