Politicians must redeem public’s faith in wake of Stormont gloom 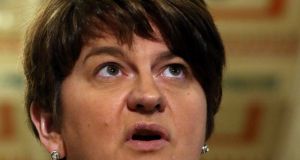 Democratic Unionist Party (DUP) leader Arlene Foster: dilemma for her and her colleagues is how to make concessions to Sinn Féin without having their faces rubbed in the muck. Photograph: Paul Faith/AFP/Getty

After the latest Stormont collapse, there was talk of a public feeling of “despondency” with the Northern secretary James Brokenshire detecting a sense of “dismay”. While there is a certain gloom that politics isn’t working, the greater public sensation is probably one of fatalism.

The more politics crashes the greater the public feeling of powerlessness and resignation to the fact that in Northern Ireland it’s always going to be like this.

Alliance leader Naomi Long warned against a “counsel of despair” and attempted to plug in to what she saw as public anger at this latest deadlock.

If people wanted “to see a deal they need to tell their political representatives to get on and as Bill Clinton said last Thursday finish the work because that is the job they were elected to do”.

But with recent years so dogged by stop/start politics, it is understandably difficult for politicians to inject a dubious public with faith in their ability to kickstart devolution back into action again. That’s their challenge.

Brokenshire was under some legal obligation to call snap Assembly elections after politicians failed to reach agreement by Monday’s 4pm deadline. He is making a more detailed statement in the House of Commons on Tuesday having already said the politicians had a “short few weeks” to strike a deal.

After that, he indicated, he will decide on snap elections or, as he appeared to more strongly suggest, a return to direct rule from Westminster.

As usual the big players determining whether a deal can be done are the DUP and Sinn Féin. Gerry Adams and Michelle O’Neill brought their negotiating team out of the talks on Sunday evening, 23 hours before the deadline, complaining about a DUP refusal to negotiate, notwithstanding that for religious reasons its politicians seldom engage in Sunday talks.

“This talks process has run its course,” said O’Neill. That pointed to total collapse but there was subsequent clarification from Sinn Féin that the breakdown was of the talks leading up to the 4pm deadline.

O’Neill said on Monday at Stormont that Sinn Féin was willing to participate in fresh negotiations. And that was the line too from Arlene Foster and the DUP and the other main parties – the Ulster Unionists, SDLP and Alliance.

Therefore all is far from lost. British and Irish and party sources said there was progress on matters such as how Brexit might affect Northern Ireland and putting in place structures to assist victims of the Troubles. One of the big stumbling blocks is over the Sinn Féin demand for an Irish language Act. The DUP, according to sources, wanted reciprocation on support for Ulster Scots and, it seems, there were also difficulties over nomenclature and whether it should be a language Act but by some other name.

These are not irresolvable problems. One of the main issues is that, after the election where Sinn Féin came within one seat of the DUP, Adams has the upper hand over Foster. Adams wants cast-iron guarantees on matters such as language and he also wants some DUP assurances that this time its MLAs are up for a more civil form of powersharing.

For Foster and her colleagues, the dilemma is how to make concessions to Sinn Féin without having their faces rubbed in the muck. Again Northern Ireland politicians have been here on many occasions and have kept the show on the road. As ever it’s down to the will of the politicians.

Monday was too short a deadline for a deal. They needed more time and more talks. Brokenshire has given them that.

Now the test for the politicians is to surprise the public and, as Bill Clinton urged, “finish the work”.