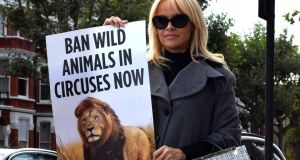 Model and actor Pamela Anderson: sent a letter urging the Taoiseach to implement a nationwide ban on wild-animal circuses.

Model and actor Pamela Anderson has promised Taoiseach Enda Kenny she will join him for a pint of Guinness if he supports a Bill to end wild animal circuses in Ireland.

In a letter sent to the Taoiseach on Monday, the former Baywatch star called on Mr Kenny to implement a nationwide ban on wild-animal circuses and gave her full support to the recently introduced Prohibition of Wild Animals in Circuses Bill.

Anderson underlined that animals in circuses had never benefited from “the luck of the Irish” and instead were denied “everything that is natural and important to them”.

“They spend their lonely lives constantly on the move, transported in cramped conditions, and shackled or caged for hours on end,” said the American actor. “And they don’t perform tricks such as jumping through rings of fire or dancing on their hind legs for fun but out of fear of punishment.”

Anderson writes in the letter that she is pleased to hear that towns and cities across Ireland are “overwhelmingly passing motions to ban them from public land” and called on the Government to join the “ever-growing list of countries that have banished this archaic form of so-called entertainment”.

She signs off the letter by saying she would love to visit Ireland and “raise a glass of Guinness (I hear it’s vegan now!)” with the Taoiseach when that day comes.

Anderson, who appeared on Brendan O’Carroll’s All Around to Mrs Brown’s show on RTÉ on Saturday, was named Peta’s person of the year in 2016 for her efforts to encourage vegan diets and in calling for a ban on the unethical production of foie gras.

The Prohibition of Wild Animals in Circuses Bill 2017, which was moved by Solidarity TD Paul Murphy, seeks to introduce a ban on the use of wild animals in circus performances and to make it an offence to train these animals for exhibition.

Speaking in the Dáil earlier this month, Mr Murphy highlighted how animals such as elephants, lions, zebras, tigers and camels could not have their welfare needs met in a circus. “The evidence shows animals in circuses suffer from long-term psychological and physical problems as a result of being held in such conditions,” he said. “They are often kept in caged wagons and small enclosures. They are regularly forced to perform unnatural and bizarre acts and are denied the space, climate and social interactions that wild animals need.

“The practice of having animals in circuses is in and of itself inherently cruel.”