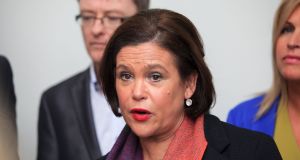 Sinn Féin has called on the Government to ensure legislation to allow for abortion in certain circumstances is introduced by early autumn, if the Eighth Amendment is removed from the Constitution.

The party formally launched its campaign to repeal Article 40.3.3 of the Constitution yesterday and insisted it would canvass in every county for a Yes vote.

While Sinn Féin’s current policy does not mirror the Government’s legislative proposals, the party leader Mary Lou McDonald said allowing for access to abortions up to the 12th week of pregnancy is the only way the exceptional cases of rape, incest and fatal foetal abnormalities can be dealt with.

She expected the party’s position to be altered in June at an ardfheis to reflect the legislation being put forward by the Minister for Health Simon Harris.

In the event the Eighth Amendment is removed, Ms McDonald said there should be no delay in implementing the legislation and would “like to think it would be law by early autumn”.

If Article 40.3.3 of the Constitution is removed, the Government is proposing allowing for access to terminations in the first 12 weeks of pregnancy.

Abortions will only be made available in strict circumstances beyond that. If the referendum is passed, the Protection of Life During Pregnancy Act remains the law until new legislation is passed.

Ms McDonald warned the timing of a general election may derail legislation being introduced. While the party did not believe any new law should be rushed through, Ms McDonald said there should be no attempt to delay or set the matter aside for political motives.

“This issue has been consistently delayed, ignored, set aside and that era is now over... Legislators must do their job.”

Ms McDonald also confirmed she is willing to debate members of the No side and to “challenge deliberate untruths being put into the public domain”.

Political leaders needed to show leadership and not attempt to cop out of this campaign, she added.

“I do not think it is a case of political leaders dominating or seeking to dominate but we should not cop out of it either.”

Asked if the Catholic Church should play a role, the party leader said religious leaders preach to their faithful in accordance with their beliefs. However, she said the church must respect the boundaries between legislators and members of the judiciary.

Sinn Féin has suspended Offaly TD Carol Nolan from the aprty for her failure to support legislation to hold a referendum on the Eighth Amendment.

Meath West TD Peadar Tóibín is also canvassing for a No vote, defying party policy on the matter. Ms McDonald said she would not censor any individual member or prevent them from participating in either side of the campaign. However, she reiterated it is her preference for them not to participate in press events for the No side.