Labour complains of ‘concerted’ attempts to tear down Yes posters

Labour TD Jan O’Sullivan has given a video to gardaí showing posters being removed in Limerick. In it two men take down posters before walking across traffic lights with the posters under their arm at Punches Cross in Limerick city last week. 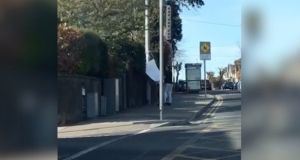 A screengrab from a video provided by Labour TD Jan O’Sullivan purporting to show her party’s posters for the abortion referendum being removed. 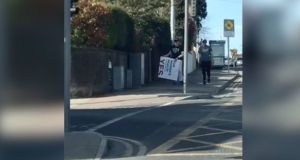 A screengrab from a video provided by Labour TD Jan O’Sullivan purporting to show her party’s posters for the abortion referendum being removed.

Labour TD Jan O’Sullivan has given evidence to gardaí of her party’s Yes posters being pulled down in her native Limerick city.

Ms O’Sullivan claimed there was a “concerted” attempt to remove Labour party posters, which are advocating a Yes in the abortion referendum campaign, and said at least 50 had been taken down in the last week. “There’s very few of them left,” she said on Sunday.

She made an appeal last week for evidence of the posters being pulled down and three people came forward.

Video evidence provided shows two men taking down posters before walking across traffic lights with the posters under their arm at Punches Cross in Limerick city last week.

They are then seen driving away in a car.

Ms O’Sullivan said she had also received a phone call from somebody identifying the two men involved.

Ms O’Sullivan said she had got reports from other parts of the country about Labour party posters being vandalised.

She added: “This is a democracy. Just because you do not like the message on one poster or another, does not mean you can take it down.

“We were the first to put up the Yes posters in the Limerick. Some other parties have put them up, and I know the Together for Yes campaign is putting them up in the very near future. I want to nip this in the bud.

“I’m on record of saying that the campaign in 1983 was tough. I thought these types of tactics would remain in the past and that both sides would be able to campaign respectfully.”

Earlier this month a man in Limerick city centre was filmed removing a Yes poster from the socialist organisation Rosa.

The man was caught on camera by Kevin Kiely jnr, who appeared in The Dark Knight Rises and World War Z.

When Kiely asked the man why he was removing the posters, he is heard replying: “None of your business”.