Bertie Ahern walks out of interview when asked about Mahon tribunal 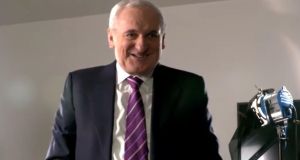 ‘I agreed to meet you on the Good Friday Agreement, we’ve done that, so I’m finished,’ Ahern says, before removing his microphone and walking off camera.

Former taoiseach Bertie Ahern has walked out on an interview after he was questioned about the circumstances of his resignation in 2008.

In an interview on German public broadcaster Deutsche Welle, hosted by journalist Tim Sebastian, Mr Ahern was reluctant to answer questions about his downfall as taoiseach.

In the wake of allegations published in The Irish Times in 2006 citing Mr Ahern had received money from a millionaire businessman while Minister for Finance in 1993, Mr Ahern vowed to “clear his name”.

Sebastian asked him if he achieved this, to which Mr Ahern replied:

“Yes I did, I’m quite happy I’ve cleared my name.”

Following the publication of these allegations in 2006, Mr Ahern was re-elected to a third term as taoiseach before resigning in 2008 after coming under increasing political pressure.

In its final report, published in 2012, the Mahon tribunal found that Ahern had given untrue evidence about the source of over £215,000 lodged in bank accounts connected to him.

When asked about this outcome, Mr Ahern says: “The tribunal gave its views and I gave my evidence and I was very happy with the situation I gave and it’s over now and that’s it.”

Becoming increasingly irritated with the direction the interview was going, Mr Ahern said:

“I’ve dealt with that issue and I’m not saying anything more about it again. That’ll be for another day.

“I agreed to meet you on the Good Friday Agreement, we’ve done that, so I’m finished,” Mr Ahern says, before removing his microphone and walking off camera.