‘Irish Times’ poll: Clear shift in attitude to abortion since 2013 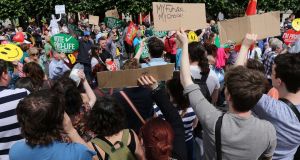 Anti-abortion and pro-choice demonstrators at a rally in Dublin in 2015. File photograph: Nick Bradshaw

Today’s Irish Times/Ipsos MRBI poll provides an early indication of public opinion and voting intentions in the forthcoming referendum on the Eighth Amendment.

Albeit early in the campaign, a significant majority of those declaring their intentions are in favour of repeal – 63 per cent Yes, compared with 37 per cent No when unlikely and undecided voters are excluded.

“How accurate are referendum polls?” is a question that is likely to be asked again and again in the weeks ahead, especially by those who may not like what the polls are showing. The short answer is very accurate, within the usual margin for statistical error.

Accuracy is about measuring opinion with a degree of precision at a point in time. Accuracy underpins the integrity of social opinion polling.

Since 2013, The Irish Times and Ipsos MRBI have polled on abortion from a range of perspectives, to reflect accurately and honestly public opinion on this important social issue.

In 2013, polling confirmed the Irish public were not in favour of abortion “when a woman deems it to be in her best interest”.

In 2014, polling showed there was an appetite for a referendum to potentially allow for abortion in cases of rape and fatal foetal abnormality.

An Irish Times/Ipsos MRBI poll in October 2016 revealed a majority in favour of repealing the Eighth Amendment.

Polls in 2017 highlighted public concern about some of the qualifying grounds for abortion put forward by the Citizens’ Assembly in non-health related circumstances such as financial distress or simply on request.

Our January 2018 poll measured, for the first time, attitudes towards abortion in Ireland on request up to 12 weeks. Somewhat surprisingly, opinion was firmly in favour, probably because the alternative was to keep the Eighth Amendment and maintain the ban on abortion in almost all circumstances, including rape and fatal foetal abnormality.

This series of polls underscores the importance of social polling and defines the meaning of accuracy in the context of polling – to measure public opinion at a point in time and track changes in sentiment over time.

In addition to accuracy, referendum polls must also demonstrate predictive ability. This expectation is not unreasonable, but when pollsters get it wrong it does not mean that polls were not accurate, only that they were not predictive. It is important to keep in mind this distinction.

Of course, polls in recent referendums in Ireland have not proven to be highly predictive, so even more reason to distinguish between accuracy and predictive ability.

For a poll to be accurate it needs to measure an opinion at a point in time. For it to be predictive it must predict a behaviour at some point in the future. Forecasts should always come with a health warning.

Some respondents are undecided at the time of interview. In the referendum poll published today, one in five said they had yet to make up their minds.

Some respondents have decided but would prefer not to answer or choose to give a “winning” answer so as not to appear foolish or out of touch. The “shy voter” is a real phenomenon, even if it is too often exaggerated to explain away a significant polling miss.

Lastly, and most importantly, voters may change their minds.

Nowadays the public are less entrenched in their opinions on social issues and therefore more open to changing their minds. Interviewing is not allowed in the week before a referendum, leaving plenty of time between polling and voting for new information to register and positions to shift.

Extrapolating from pre-referendum polls to predict the outcome attaches some risk.

The risk quotient is highest when the referendum topic does not engage the public early in the campaign. If the first time a respondent has considered how they will vote is when asked by an Ipsos MRBI interviewer, their response is less reliable than if they had spent weeks or months weighing up both sides of the argument. They are also less likely to actually vote.

Notwithstanding all the caveats mentioned here, polls conducted at the end of this campaign are likely to be both accurate and predictive.

In this referendum we can reasonably expect voting intentions to translate accurately. Abortion is a hot-topic issue and the vast majority will have made up their minds by the time interviewers knock on their doors. We can also expect a relatively high turnout, which increases the predictive power of polls.