No safety protocols in place at Louth hospital for dealing with attacks, says staff member 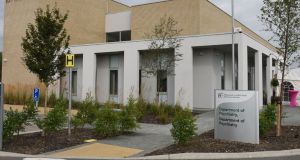 A spokesman for the Garda Síochána said officers responded to an incident at Drogheda Department of Psychiatry (above) at about 9.40pm on Saturday. File photograph: HSE

A former patient broke into a psychiatric facility in Co Louth on Saturday night armed with a 12-inch butcher’s knife and threatened to harm staff.

A spokesman for the Garda Síochána, which is investigating what happened, said officers responded to the incident at Drogheda Department of Psychiatry at about 9.40pm. “The matter is under investigation,” he said.

A member of staff at the facility, who spoke to The Irish Times on condition of anonymity, said the man threatened to kill staff members after storming the building.

“He jumped over the gates armed with a 12-inch butcher’s knife,” she said.

“The staff had to lock themselves and patients into rooms. The gardaí came about 10 minutes later but by that stage he had left.” The staff member said there was no security presence on wards.

Furthermore, she said the incident was not the first of this nature to occur. “There was another incident last summer where a social worker was seriously assaulted in the car park by an ex-patient with a rock, and suffered a serious head injury,” she said.

“Another ex-patient, about a year before that, broke into the reception area at night with a weapon and threatened staff. There is a female patient in the unit who has seriously assaulted more than 15 nurses, including very seriously biting three of them. It can take up to 10 or 12 staff to put her in seclusion because she’s so strong.”

The member of staff was critical of security and safety procedures at the facility.

“There has been no plan put in place. All the staff are in uproar about it. There are ongoing safety issues in terms of the number of staff we have and the cohort of patients we’re getting in. They are getting more violent.”

Another incident, about 18 months ago, is under investigation by the Health and Safety Authority.

“Usually when someone becomes aggressive, it’s because they want something or they don’t want to be there. He didn’t want anything. He just wanted to harm staff. It took the gardaí in that instance 20 minutes to respond.

“A lot of the time it’s driven by psychosis, where people aren’t fearful and don’t have an idea of the limits of their strength. That makes them a lot stronger and a lot more violent. We just don’t have anything to protect ourselves.”

In response to queries in relation to Saturday’s incident, a spokeswoman for the Health Service Executive said safety of patients and staff was “a key priority” and that a review was underway in Drogheda.

“I can confirm that there was an incident in the unit on Saturday night to which the gardaí were called,” she said. “There was no injury to staff, service-users or others arising from this incident.

“It would not be appropriate to comment on cases involving persons who are admitted for treatment in the Department of Psychiatry, for example biting, challenging behaviours.

“There is security in place in the building, and staff carry personal alarms. All staff are trained in the management of violence and aggression.

“Security levels have been increased in the Department of Psychiatry on a temporary basis while the service carries out a review of overall security in the unit.

“The service is conducting an After Action Review following this isolated incident with a view to implementing improvements identified through the review process. Security personnel in the unit have the additional backup of mobile security patrols.”