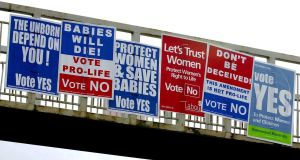 Referendum posters on a pedestrian bridge in Dublin in 2002.

A large majority of voters would like to see another referendum on abortion to liberalise the current law, according to the latest Irish Times/Ipsos MRBI poll.

Asked if a referendum should be held on whether or not to permit abortion in cases of rape or where the foetus will not be born alive, 68 per cent said they were in favour, 23 per cent against and 9 per cent had no opinion.

Labour voters were the most strongly in favour, with 72 per cent of them backing the move.

Supporters of all parties were almost equally strong in support of a referendum on the issue, with Fianna Fáil voters being the least enthusiastic about the prospect.

There was a significant variation across the age groups, with the older voters less inclined to support another referendum with the over-65s being least enthusiastic.

By contrast, 77 per cent of the 18- to 24-year-olds favoured a referendum with just 12 per cent against. Middle class voters were marginally more supportive of another referendum than working class voters, but there was no significant variation.

Neither was there a significant difference in the attitudes of men and women. People in Dublin were stronger in their support for the holding of another referendum than people in other regions.

There is little prospect of another referendum on abortion being held in the lifetime of the Fine Gael/Labour Coalition as both parties have ruled it out after the political difficulties experienced in getting the Protection of Life During Pregnancy Bill through the Dáil.

The significance of the poll is that it suggests the next referendum on abortion will involve moves to liberalise the law. In the past, pro-life groups have campaigned for another referendum to ensure abortion could never be legalised.

The poll was conducted last Monday and Tuesday among a representative sample of 1,200 adults aged over 18 at 120 sampling points spread across all constituencies. The margin of error is 2.8 per cent.