Fine Gael succeeds by keeping distance between economy and abortion 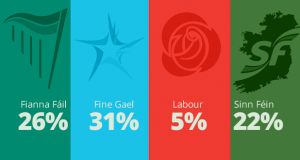 After retreating two points in January from a high of 36 per cent in December, Fine Gael has slipped a further three points to land on 31 per cent in this poll.

For Fianna Fáil, its poll rating is moving in the right direction, albeit with a marginal gain of just one point. With 26 per cent support, it has reduced the gap and is now just five points behind Fine Gael.

Sinn Féin is up three points to 22 per cent, its highest rating since early 2016.

Labour registers a modest gain of one point, up to 5 per cent.

Independents and other smaller parties combined have dropped back to 16 percent, only half the level of support they enjoyed at their peak in 2014.

Context is everything and interviewing for this latest Irish Times/Ipsos MRBI poll coincided with the early days of campaigning in the referendum to repeal the Eighth Amendment.

Fieldwork took place on Monday and Tuesday of this week, as posters began appearing on lampposts up and down the country.

The social media war had also kicked off in earnest, but it is important to remind ourselves that Twitter and Facebook do not carry the weight of TV, radio and press when it comes to influencing public opinion and campaigning across the traditional media had yet to begin in any real sense.

That said, if it turns out to be a close-run thing, the marginal influence of social media may be enough to tip the balance.

It is not just recent referendum coverage that may be echoed in these latest poll findings.

Since late last year, the referendum process has been followed closely by the media. Also of contextual relevance are the referendum journeys taken by each party and their leaders.

The Rubik’s Cube challenge of aligning the referendum views of politicians, parties and supporters is highlighted by striking variations in support within different segments of the population.

In the case of Sinn Féin, its support for repeal will not ruffle too many feathers among its base.

We know that younger voters are strongly in favour of repeal and it is among these voters that Sinn Féin is most popular, attracting 42 per cent of the vote among 18- to 24-year-olds.

The gains Sinn Féin has registered in today’s poll are sourced exclusively from the 18- to 49-year-old age cohort.

Fianna Fáil draws the majority of its support from voters aged 50 or over and support for the party among older voters has grown since January (up five points to 30 per cent among 50-to 64-year-olds and up two points to 40 per cent among the over 65s).

A majority of Fianna Fáil TDs would probably be like-minded with these older voters, most of whom in our January poll expressed a preference for keeping the Eighth Amendment.

Fianna Fáil’s conservative stance on the abortion question will mitigate the risk of alienating older voters, but may create something of a disconnect with younger voters.

Fine Fáil leader Micheál Martin, who has personally declared in favour of a Yes vote, enjoys a satisfaction score of 40 per cent, two points down on his January rating.

Fine Gael also needs to cater for a range of opinions on abortion within its base.

The party is well-liked by older voters and those from farming backgrounds (a significant 47 per cent of farmers give Fine Gael their first-preference vote) and we can expect a substantial proportion of these demographic groups to vote No in the referendum.

In contrast, the professional and managerial classes (ABs), among whom Fine Gael is also extremely popular (44 per cent support), have been shown by polls to be overwhelmingly in favour of a Yes vote.

For Fine Gael and Sinn Féin it had been 15 years and 25 years respectively without a change at the top. Arguably, new leadership has given voters a reason to take a fresh look in the shop window.

While it is never possible to separate correlation from causation, it does appear that Varadkar’s election success was a shot in the arm for Fine Gael. Party support peaked at 36 per cent in December, followed by a high of 60 per cent satisfaction with his leadership.

In this April poll, post-honeymoon, both party and leader have given up some of their gains, with support for Fine Gael down to 31 per cent and Varadkar’s satisfaction rating somewhat lower at 55 per cent.

For Sinn Féin and Mary Lou McDonald, the honeymoon has just begun. Sinn Féin is up three points to 22 per cent while McDonald’s first satisfaction score comes in at 39 per cent: a healthy improvement of 12 points on her predecessor Gerry Adams’s rating in January.

With the spotlight firmly on the referendum, it is easy to forget the role played by public and personal finances in shaping our political choices.

Our stellar economic performance of late is reflected in a relatively strong Government satisfaction rating of 44 per cent, unchanged on January and the highest it has been in a decade.

Among Fine Gael supporters, Government satisfaction is highest at 74 per cent. Interestingly, Labour supporters are the next most satisfied (at 63 per cent), followed by supporters of Fianna Fáil (46 per cent).

The over 65s are the most satisfied with how the country is being managed (at 55 per cent), despite being the least enthusiastic about the referendum.

It seems the Government is managing to create some distance between the business of managing the country and its role in overseeing a referendum on the Eighth Amendment.