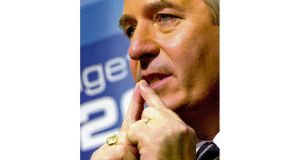 Charlie McCreevy speaking during his press conference on the budget in 2000. photograph: moya nolan

Budget 2000 has been described as the greatest giveaway budget in the history of the State, but a landmine was buried in the text of then finance minister Charlie McCreevy’s speech.

Shouts of “shame” echoed around the Dáil chamber when McCreevy announced an unexpected tax perk for double-income families on December 1st, 1999.

He was soon accused of an attack on stay-at-home mothers with his “radical” change to the tax treatment of married couples.

The goal of his move towards the “individualisation” of the standard rate band was to encourage more married women to return to the workforce.

It meant a married couple with two spouses working would have twice the tax allowance of a couple with one partner working.

But the damage was done and the minister faced a furious backlash from Fianna Fáil backbenchers and various interest groups.

McCreevy quickly told his party TDs he would introduce the £2,000 tax allowance for stay-at-home parents, promised in the 1997 Fianna Fáil manifesto, within the lifetime of the government.

Pressure continued to mount, however, and within a week he announced a damage-limitation measure: a tax allowance for carer spouses in the home.

The £3,000-a-year tax allowance at the standard rate was for spouses of married one-income families who worked in the home caring for children or elderly or “handicapped” people.

Cabinet papers released under the Freedom of Information (FoI) Act show how the “pros” and “cons” of this new proposal were viewed by the shell-shocked cabinet in the aftermath of the banana-skin budget.

The “cons” were that the measure to extend the married one-income band by £3,000 “would dilute the move to individualisation”, according to an options paper prepared for ministers and dated December 7th, 1999.

Other disadvantages outlined were that it “would still leave one-income couples with lower bands than two-income couples” and “would probably not satisfy the demands being made by stay-at-home spouses”.

The only argument outlined in favour of the proposal was that it “would go some way to bridging the gap between one- and two-income married couples”.

However, a note presented the following day provided ministers with arguments to use in favour of the new tax allowance.

The note said the new measure would help more than 180,000 stay-at-home spouses and that it “more than fulfils” the government’s pre-election promise to introduce a tax allowance of £2,000.

It was “worth proportionally more to those on lower incomes because it is standard-rated”, the note added.

The Irish Times sought copies of all cabinet papers relating to budget 2000 under FoI.

A total of 60 records were released in full; one record was released partially; and 22 were withheld.

The documents reveal attempts by McCreevy to rein in the spending demands of his fellow ministers.

He complained about the “huge” estimates demands submitted by ministers, which he felt “mirrored” the “growing signs of widespread, unrealistically high expectations among the public”.

Total demands for current spending should be reduced by £504 million and capital spending by £785 million, he demanded.

In a memo dated October 19th, 1999, McCreevy said sufficient proposals for reductions on demands had not been put forward by ministers.

He proposed a compromise that departmental spending current expenditure demands should be reduced by £243 million and those for capital spending by £313 million.

He noted that allocations decided on this basis would be “substantially above the July limits” and said it was essential ministers agreed to frame their 2000 estimates on the basis of these new limits and not seek to breach them.

Agreement on reductions was reached with all ministers except the then minister for justice John O’Donoghue, according to a government memo dated October 27th, 1999.

O’Donoghue eventually negotiated a lower cut than McCreevy went on to propose.

McCreevy announced the controversial decentralisation programme in the budget of 2004.

He left domestic politics after being nominated as a European commissioner in July 2004.

However, records covered by section 19 (1) that were created on or after April 21st, 1998, and which are at least 10 years old when an FoI request for their release is received, are eligible for release, unless other specific exemptions in the FoI legislation apply to them.

Protection for cabinet records was extended from five to 10 years in 2003.

The then minister for finance Charlie McCreevy said he agreed with the then taoiseach Bertie Ahern that while 30 years was too long a period to restrict information, five years was too short.

Reeling in the Boom Budget 2000

1:00 Schengen Area countries refusing US tourists over fear of Covid-19