Why is there a giant red squirrel on Tara Street? 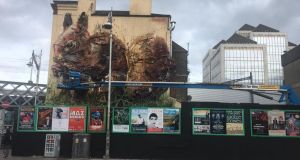 A giant red squirrel has appeared at the top of Tara Street in Dublin’s city centre this weekend, courtesy of Portuguese environmental artist Artur Bordalo.

The mural, which is beside the Workshop Gastro Pub on Georges Quay, was unveiled on Saturday.

Irish filmmakers Trevor Whelan and Rua Meegan have been filming Bordalo for two years and captured his five-day project in Dublin on film too.

It will form part of an Irish Film Board funded documentary, which will premiere this year.

He chose the endangered red squirrel for the Dublin installation because it is a species under threat from deforestation and a virus carried by the grey squirrel where its population is outnumbered six to one.