The voyage of the Swanhilda: when a death ship came to Dublin 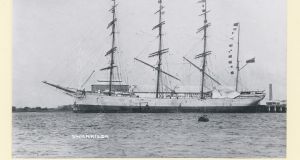 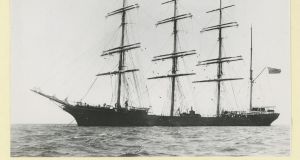 On Friday, September 10th 1897, readers of The Irish Times were alerted to the sight of a “remarkable ship” sitting in the Liffey. “There is now moored in the Alexandra Basin a four-masted barque named the Swanhilda, Captain Fraser, which has reached this port from San Francisco,” reads a short report on page six that day.

It was an impressive-looking vessel, but its appearance wasn’t the only factor that made the Swanhilda remarkable. In San Francisco on February 4th of the same year, the barque and its crew were part of a police scheme to capture an elusive conman and serial murderer, Frank Butler - a Dorset-born wanderer who was fleeing Australia and the law. A number of young men had been found dead in New South Wales’s remote Blue Mountains area and Butler was the prime suspect.

“The Swanhilda, the vessel on which the man Butler, who is charged with the recent mysterious murders in New South Wales, sailed from Australia, arrived here today,” begins the report from San Francisco, which appeared in The Irish Times the day after the covert operation.

“Special arrangements were made for Butler’s arrest before he could have a chance to escape ashore, and the detectives were sent to a point down the bay last night to watch for the incoming vessel. A pre-arranged signal was to be made to them by means of the whistle of the tug sent to tow the Swanhilda in, but the detectives did not hear it. After a time, however, they recognised a red light signal from the tug, which indicated to them that Butler was on board the sailing vessel.”

Six detectives and a handful of reporters set out in a smaller boat, meeting the Swanhilda at Fort Point, at the southern part of what is now the Golden Gate Bridge. When the authorities boarded the ship, the crew lined up for inspection. As arranged, the captain made sure to stand in front of Butler, who was travelling under the name Lee Weller - he had assumed the identity of one of his victims. “This was done, and at the same time, a local police sergeant covered the accused with his revolver. Butler threw up his hands at once and he was promptly handcuffed.”

In the face of capture, he still played ignorant, insisting his name was Weller. “Although completely surprised, he remained remarkably cool, and calmly smoked a cigarette as he was taken ashore.”

The truth is, at the time, nobody knew Butler’s real name. What caught people’s attention were his crimes, dubbed “The Australian bush murders” in Irish media. The exact number of victims isn’t known, but by the end, he was convicted of three murders of young men in the isolated Australian wilds. According to the Sydney Morning Herald, he used classified ads in the paper to lure would-be workers to the Blue Mountains with promises of prospecting fortunes. The men dug tirelessly and when the holes were big enough for graves, Butler shot them in the head.

His known victims were captain Lee Weller, a man called Preston and another called Burgess - though he was heavily implicated in the murder of another man, Davis, but wouldn’t divulge the details while in custody, he said, because he didn’t want to get another person in trouble.

He was extradited to Australia and on the voyage, flashes of other possible murders became apparent, according to another report in The Irish Times on June 19th. The credibility of his professions were questionable: “When in a talkative mood, Butler was full of reminiscences, some of which were so startling as to earn for him from one of his custodians the appellation of ‘A born liar’.”

Though chatty and full of ramblings, he didn’t like discussing his time in the Blue Mountains.

“Butler was questioned why when in Sydney he advertised for so many miners, and replied: ‘Because I wanted to get some; I knew plenty of people in Sydney, but not miners.’ - ‘Then why did you take Captain Lee Weller?’ - He became silent, and spoke upon another subject.

“In every instance where the attempt was made to link him with any tragedies which took place in New South Wales, he made apparent that the questions were irksome.”

The short Irish Times report that signalled the arrival of Swanhilda in the Liffey indicates authorities thought he may have been responsible for up to 15 other murders, but he was convicted only on the three mentioned. He was hanged in Darlinghurst Prison at 9am on July 17th, 1897, according to a report that day in the West Australian Perth. He was businesslike on the day, according to the paper, showing an uncharacteristic “fortitude” on the gallows until the end - his last words to the executioner: “Let her go.”

As for Swanhilda, the Glasgow-built ship integral to Butler’s capture, it too would meet its fate in grim terms. Thirteen years after Butler’s hanging, the ship, captained then by a man named Pyne, struck land at Staten Island while en route to Chile from Cardiff. On May 16th, 1910, visibility was low and it was getting dark when the ship ran aground in misty weather and with a half-gale blowing, according to a report in The Irish Times on July 14th that year.

When the boat crashed, the captain ordered all hands on deck, and began releasing the ship’s two lifeboats. He boarded one with his wife, whom he had just recently married.

“As the captain’s boat, in which was his wife, was being lowered, something went wrong with the fall tackle and she was capsized, and all the occupants being thrown into the sea. Lifebuoys were thrown from the ship, all but three, who swam 200 yards to the shore, were drowned.” In all, Swanhilda’s captain, his new bride and 12 of the crew members died on its final voyage.