Boy found under his bed after police search operation

Josh Dinning (9), from Gateshead, was hiding in cupboard when reported missing 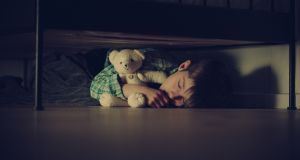 Josh Dinning (9) from Dunston, Gateshead, had been reported missing after his parents went into his room to get him up for school but found his bed empty. File photograph: iStock

A boy was found hiding under his bed after a huge police search and rescue operation had been launched to find him.

Josh Dinning (9) from Dunston, Gateshead, had been reported missing after his parents went into his room to get him up for school but found his bed empty.

They had last seen him the night before on Monday at 9.30pm after tucking him in and he had not been seen at school either.

But after dozens of officers were called in to help find him, including a helicopter, sniffer dogs and boats on the River Tyne, he was found in a cupboard under his bed.

Older brother Scott told the Chronicle newspaper: “I was just sitting outside the house when all of a sudden I heard someone saying, ‘he is here’. Apparently Josh had got into the cabinet under the bed. It’s one of those beds that has sliding doors and somehow he has got himself inside and shut the doors.”

He said the police had been into the room to check, but no one realised where he was.

Northumbria Police said they would now look into why he was not found during their initial searches.

They said: “We can confirm that missing Josh Dinning was found at around 12.40pm hiding in a hidden drawer compartment under his bed.

“Josh was found by one of our officers who had been searching the address. Josh was returned to his mother who was clearly relieved that he was found safe and well.

“An initial search of the house had been conducted throughout the morning but the compartment had not been checked by either police or Josh’s family.

“He has now been reunited with his family and we will be reviewing why he was missed in our initial searches.”