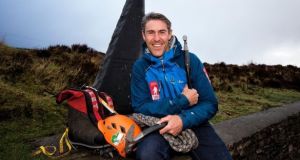 Jason Black, who is a “global endurance” athlete, made his first attempt on K2 two years ago. Photograph: Evan Logan.

Two Irish mountaineers have reached the summit of the world’s second-highest mountain, K2, this weekend, 10 years after the first summit by the late Limerick mountaineer Ger McDonnell.

K2 is regarded as far more dangerous than Everest and and there have only been about 320 successful ascents recorded.

Noel Hanna from Dromore, Co Down, and Jason Black from Co Donegal ascended the 8.611m-high peak on two separate expeditions.

Cork mountaineer Mick Murphy, who has climbed Everest and has been to almost 8,000m on K2, described the two climbs as an “extraordinary event for Irish mountaineering”.

“K2 has a record of being a much more difficult mountain to survive on, and it is a brilliant achievement,”Murphy said.

Both Irish climbers are Everest veterans, with Black climbing Everest’s North face in 2013 and Hanna having made a record seven ascents of the world’s highest mountains.

Hanna and his wife Lynne recently claimed the title of first married couple to summit Everest both from its southern approach via Nepal and a northern route via Tibet.

Black, who is also a “global endurance” athlete, made his first attempt on K2 two years ago, and pledged to return on the 10th anniversary of the death of first Irish K2 summiteer Ger McDonnell.

McDonnell from Kilcornan, Co Limerick died in August 2008 after reaching the summit and experiencing bad weather on the descent. He had assisted several other climbers before he was swept off the mountain.

Black took a jumar, or ascender, device which had been given to him by McDonnell’s mother, Gertie, and he also had the support of the Irish Red Cross as an “ambassador” for the aid organisation.

Black reached the summit of K2 at 3am Irish time on Sunday, according to Damien O’Brien, brother-in-law of Ger McDonnell.

“We had just finished our last anniversary cycle for Ger, involving 91 cyclists, on Saturday,”O’Brien told The Irish Times.

“A few hours after leaving the community centre, we heard that Jason had made it to the top and was on his way to a lower camp,” he said.

“We are delighted and wishing him a good descent, as the summit is only half the climb and it is all about getting safely down,” O’Brien said. He confirmed that Black’s wife Sharon had flown out to meet her husband.

Black was part of a separate international expedition led by Garrett Madison with Sherpa support. He placed a plaque in McDonnell’s memory at K2 base camp in Pakistan earlier this month.