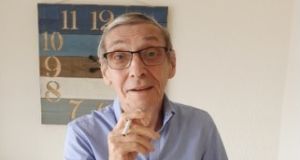 Brian Robson: he was just 19 when two Irish friends helped him to climb into a crate so that he could airmail himself from Melbourne to London

Were you in Australia in 1965, and did you help a homesick Welsh man to mail himself home in a wooden crate? If so, he wants to hear from you.

Brian Robson was just 19 when two Irish friends helped him to climb into a crate so that he could airmail himself from Melbourne to London. His journey took some hazardous turns and could have been fatal had it not been interrupted.

I couldn’t even tell you their surnames it’s such a long time ago, and I’d only recognise them if I saw photographs of them

The Cardiff teenager had taken a job with Victorian Railways on an assisted immigration programme in Australia in 1964. He immediately regretted it and wanted to return home, but under the scheme he would have to repay approximately £700. His monthly wage was around £40.

Eleven months into his stay he devised a plan to send himself home by air-freight, cash on delivery. He had become good friends with two Irish people who also worked for Victorian Railways.

“I’m 99 per cent sure that they were called Paul and John,” he told The Irish Times. “I couldn’t even tell you their surnames it’s such a long time ago, and I’d only recognise them if I saw photographs of them that were taken at that time. We got on famously…They used to come to my bedsit, or I would go to see them, almost on a daily basis.”

He asked them for help with his unorthodox itinerary. “Paul really was 100 per cent against it…but John said ‘don’t worry about it, I’ll persuade him’. And so, they both went ahead and helped.”

He bought a wooden crate the size of a mini-fridge and booked his slot with Qantas airline. The Irish pair helped to harness him into the crate and nail it shut. It was a tight fit as it also contained his suitcase and pillows as well as a flashlight and a book of Beatles songs to keep him company.

Mr Robson was not expecting a pleasant journey, but it was still much worse than he had bargained for. “It was quite a horrific experience, in truth.”

The journey from Melbourne to London was supposed to take 36 hours but that flight was full, so he was loaded onto a Pan Am flight which took a much slower route.

Despite numerous “This Side Up” signs on his crate, it was unceremoniously dumped upside down, so he was left standing on his head for almost a day before being loaded on to a plane. The airplane’s hold was simultaneously freezing and boiling hot, his body ached, and he had difficulty breathing.

Four days later his crate was lifted into a freight shed. But it wasn’t London. He was in Los Angeles, and the FBI immediately became involved.

“My two friends and I didn’t know whether my plan was legal or illegal, quite honestly, so I agreed that I would keep their names out of it completely, which I did.”

After the FBI confirmed that he was not a Cold War spy, he was released and flown to London first class by Pan Am. He spent a life working in retail, and now, aged 75, will tell his story in a book, The Crate Escape, which will be published in late April. A film is also in the works.

Yet he has always wondered what happened to his Irish friends. He wrote to them when he returned from Australia, but didn’t get a reply.

“I did try a couple of times, I think, and of course we didn’t have internet in those days, so from that day to this I’ve never spoken to them. They were the last people I spoke to in Australia before the crate was sealed shut.”

*Paul and John, or their relatives can contact Mr Robson at brianpms@hotmail.com