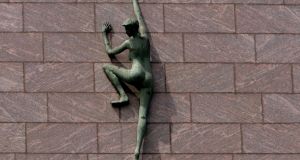 The Aspirtion statue at its former home on the side of Treasury Building. File Photograph: David Sleator 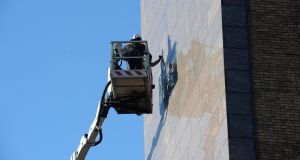 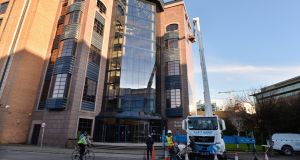 One of Dublin’s best known sculptures - the naked woman climbing up the Treasury Building - has been removed, though it may re-appear elsewhere. according to its owners.

The Aspiration sculpture - which was famously switched from a male to a female after property developer Johnny Ronan said “there was no way he wanted a naked man climbing up the wall to his window” - was taken down from the building on Grand Canal Street on Friday.

“She’s safe and well, and hopefully you’ll see her pop up in a new city centre location before too long,” a spokesman for Ronan Group Real Estate (RGRE) told The Irish Times.

Google completed the purchase of the Treasury Building from RGRE in February this year, and a condition of the sale was that the sculpture would be removed.

“Her removal today was carried out in accordance with that,” the spokesman said.

The building, which formerly housed the National Asset Management Agency (Nama), is expected to be used by Google’s expanded workforce once the pandemic is over.

The tech giant already owns offices buildings in the area, including its European headquarters on Barrow Street, and the nearby Montevetro building, both of which were developed by Treasury Holdings, the company formerly led by Mr Ronan and Richard Barrett.

The Treasury Building is on the site of the former Boland’s Bakery, a building that featured during the 1916 Rising, and the climbing figure, Aspiration, was meant to be a metaphor for Ireland.

An original maquette model of the sculpture, comprising a polished granite slab with bronze models of the original male figure and the subsequent female version, went up for auction in Dublin in November 2012, but stalled at €9,500 and failed to sell.

Artist Rowan Gillespie revealed at the time that the gender of the piece was changed after Mr Ronan objected to the original plan.

He said the property developer was delighted with the change of gender, given that his then personal office window overlooked the sculpture.

The sale of the Treasury Building is understood to have secured its owners a significant return.