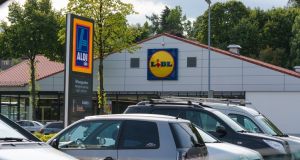 Aldi tweeted Lidl suggesting that maybe it was ‘time to tell everyone that we’re not actually related’ before adding a coquettish ‘yet’. Photograph: iStock

Aldi and Lidl are sometimes bitter rivals, locked in fierce battle for market share with their feuding even ending up in the courts on occasion, so when one made moves to seduce the other via social media ahead of Valentine’s Day is it any wonder people were shocked and scandalised.

The two German discounter supermarkets have been, um, flirting with each other on Twitter over the last 24 hours in a fashion which would make more prurient retailers blush.

And if the romance gets any more serious the retailers may soon be walking down the middle aisle hand-in-hand.

The pre-Valentine’s Day lovefest started when a suddenly feisty Aldi Ireland account asked if Lidl Ireland fancied a Netflix and chill on Sunday evening, a modern day euphemism for what might have been called the shift - or something more - in olden times.

“Bit weird since most people think we’re related,” the Lidl Twitter account responded almost immediately, a reference to a wildly believed notion that Lidl and Aldi were set up by the same family . They weren’t.

Aldi came back with a Tweet suggesting that maybe it was “time to tell everyone that we’re not actually related” before adding a coquettish “yet”.

Lidl then blocked Aldi, a move which the latter was only too delighted to share with its followers.

After being publicly shamed and apparently on the back foot, Lidl sheepishly unblocked Aldi and told everyone it had taken the step in jest. “Ha this was only a joke! No blocking really we’re all friends,” it said.

Was anyone buying it? Probably not.

Aldi stepped up its courtship.

“WE KNEW YOU LIKED US REALLY,” it shouted before asking if the two shops were “still on for Sunday then? Bring some of those Potato Snack things but make sure it’s got the 4 extra inches.” This was followed by a winking emoji.

Without context this tweet seems peculiar until you realise it was a reference to an earlier Lidl tweet to a customer called Carl who had complained that the Pringle’s-like treat he had bought in a store was missing four inches at the top.

“Hi Carl we’re sorry to hear about your missing 4 inches,” the Lidl response had read. Carl, to his credit, took the tweet in good humour.

The over and back which started on Thursday evening continued into Friday with Aldi sending a dozen red roses to Lidl’s head office.

At the time of writing Lidl had not responded and it remains unclear if the two retailers will actually hook up on Sunday but if they do and it works out they could end up having some very competitively priced babies.