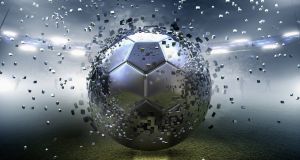 The specialists discovered that the secret to success is not necessarily the Premier League’s biggest names. File photograph: Getty Images

It has engrossed millions of armchair sports fans, turned star players into points machines and even inspired a hit 1990s television show. But what happens when scientists crack the code to fantasy football?

Mathematicians at the University of Limerick claim to have done just that by analysing the behaviour of top-ranked virtual managers in the online Fantasy Premier League (FPL).

With the aid of machine learning tools and the study of millions of web pages and manager behaviour, they discovered that the secret to success is not necessarily the Premier League’s biggest names.

“FPL on the surface appears to be an extremely simple game in that one should just choose the most talented footballers for their teams and see what happens,” said PhD student and lead author Joseph O’Brien.

“However, in this study we analyse the results of competitors over multiple years and find that there are in fact groups of managers that consistently perform extremely strongly, suggesting an element of skill.”

FPL is an online game based on the top division of English football. It has seven million subscribers, each of whom build virtual teams from real-life players with a limited budget. They score ranking points on overall performance.

Teams comprise 15 players from approximately 600 available with price based on their perceived value to online players.

Success may seem uncertain, but possibly not if you ask Mr O’Brien and his colleagues, Prof James Gleeson and Dr David O’Sullivan at the Mathematics Applications Consortium for Science and Industry at the University’s Department of Mathematics and Statistics.

Their research is published in the peer-reviewed journal Plos One and claims, via a combination of “large-scale data analysis, statistical techniques, and network science”, to provide a deeper understanding of the behaviour of the game’s “very best competitors”.

They looked at publicly available data and extracted information from some 40 million web pages on the actions of the top one million ranked managers. In this way they were able to isolate a number of strategies that separated successful managers from the rest.

“In particular there were multiple points in the season in which successful managers acted in an extremely different manner to those lower ranked, almost as if the thousands had come together with a ready-made game plan,” explained Mr O’Brien.

They believe the most interesting finding was that, despite the volume of available footballers, there were multiple stages in the season when teams selected by skilled managers appeared “highly similar”.

And in a breakthrough reminiscent of the US film Moneyball, they found success does not always lie with the stars.

“We were amazed to find that for most of the season the key player in successful teams wasn’t [Liverpool’s] Mo Salah or [Manchester City’s] Kevin De Bruyne but rather Aaron Wan-Bissaka – a player in his debut season for Crystal Palace, due to his extremely low price and surprisingly efficient scoring,” said Mr O’Brien, describing him as an “optimal” player, allowing more expensive ones elsewhere in the team.

And so the secret to fantasy football success? The highest ranked managers, according to the research, demonstrate an emphasis on long-term planning and the identification of optimal enabling players.