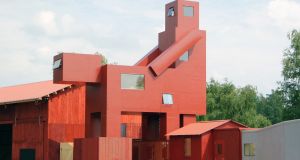 The collective Atelier Van Lieshout’s “Domestikator” (2015), which was to go on view on in 2017 in the Louvre’s Tuileries Gardens. The Louvre has withdrawn the large installation for being sexually explicit. Photograph: Atelier van Lieshout via The New York Times

The Louvre has withdrawn a large installation by a Dutch art and design collective for being sexually explicit.

The piece, “Domestikator”, by the collective Atelier Van Lieshout was to go on view on October 19th in the Louvre’s Tuileries Gardens as part of Hors les Murs, a public art programme organised by the Fiac contemporary art fair.

“This is something that should not happen,” Joep van Lieshout, the collective’s founder, said in a telephone interview. “A museum should be an open place for communication. The task of the museum and the press is to explain the work.”

The London-based gallery Carpenters Workshop, which represents Atelier Van Lieshout, said in a statement that the Louvre’s decision was “very damaging for the artists and the Fiac programme,” adding, “The artwork symbolises the power of humanity over the world and its hypocritical approach to nature.”

A spokeswoman for the Louvre said that the choice of the works exhibited in the Tuileries Gardens within the framework of the Fiac is made by three committees. “The work ‘Domestikator’ was presented after these commissions,” the spokeswoman said, which didn’t allow for a discussion of the “presentation in the garden collegially.”

The number of contemporary works presented in the Tuileries during this year’s Fiac is particularly important, the spokeswoman added. It is about 30, while some 20 pieces were usually offered for public view by the many garden visitors.

The French newspaper Le Monde reported that the Louvre’s director, Jean-Luc Martinez, sent a letter to Fiac raising concerns about the piece. “Online commentaries point out this work has a brutal aspect,” Martinez said in the letter. “It risks being misunderstood by visitors to the gardens.”

The museum also raised concerns about the sculpture, which is 40ft high, being situated near a children’s playground. In the past three years, the “Domestikator” has been exhibited at the Ruhrtriennale in Bochum, Germany, where it remains on view until Wednesday. The Carpenters Workshop said that the Paris City Hall had offered to help find an alternative public space for the artwork, but that “it was too late.”

1 Republic’s Coronavirus death toll rises by 28 as confirmed cases up by 500
2 ‘When I look at the viral loads we find in elderly people, it is mind boggling’
3 Doctors sent to help at Cavan hospital after up to 70 staff infected with coronavirus
4 Chief medical officer urges people not to visit hardware stores
5 Coronavirus: Simon Harris expects restrictions to stay in place for weeks
Real news has value SUBSCRIBE