A bogus priest who paid for his pints with blessings

Costume capers in 1902: ‘He raised his hand and blessed the giver, saying the blessing was better than money’ 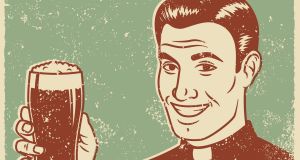 In 1902, police followed a ‘priest’ through Dublin after a chance encounter on North Earl Street. Photograph: iStock/illustration

Seargent Sheehan approached a middle-aged priest standing on North Earl Street in Dublin city centre. It was a Friday morning in winter 1902 and the officer was looking for a different clergyman; he asked the priest to accompany him the short distance to the cathedral on Marlborough Street.

The priest hesitated, to Sheehan’s surprise, and eventually declined to help, explaining that “the Lord directed him not to go.”

“How quickly the Lord spoke to you,” Sgt Sheehan replied, according to a report in The Irish Times on December 13th.

They parted. Sgt Sheehan, accompanied by Sgt Ahern, tailed the priest as he walked through Dublin, stopping him a short time later for a second chat. This time, the man explained “he was a Father Walsh from America”.

The police let the priest on his way again, this time following him down Henry Street and Mary Street, onto Ormond Quay and eventually into Adam And Eve’s Chapel - or the Church of the Immaculate Conception on Merchant’s Quay.

“He obtained a glass of port in a public house,” reads the Irish Times report, “and not having money to pay for it, he raised his hand and blessed the giver, saying the blessing was better than money.”

He didn’t stop there, according to the Sergeant.

While in the chapel, the priest “appeared to be fervent in prayer, and after leaving he proceeded to one restaurant and then to another; he had a herring in each place, and again he gave his blessing.”

Having let the charade run its course, the officers arrested the “priest”. When they brought him back to the station, he said his real name was James Corbett, and that he was an “American prize-fighter”.

James “Gentleman Jim” Corbett was a real - and very famous - heavyweight boxing champion operating in the US at that time. However, a search of Corbett’s pockets threw up some documents bearing yet another alias, “Walsh”.

The first was a letter inside an envelope with the Brooklyn post office mark and the address: Robert Walsh, 7917, HM Prison, Liverpool England. It was posted on November 10th - on the corner was written: “Discharged 22, 11, 02”.

The letter in the envelope revealed a clue as to his financial situation:

I received your letter and am very sorry to hear that you are in trouble and as I write this to you my mother is very sick and she is unable to send you any money.

She cannot help you, as she has got nothing to help you with.

No more at present,

The police also found a card from The Liverpool Society of Friends and Foreigners in Distress, this time bearing the name Samuel R Walsh.

Unsuspecting members of the public who had been duped by Corbett came forward to give evidence. At a court hearing in December, one unnamed woman living on Parnell Street - then Great Britain Street - said she gave him sixpence after he pretended to be a “Dominican priest from America”.

A report in the Ulster Herald published on December 20th remarked that when he next appeared in court, he refrained from wearing his costume. He was remanded and sent forward for trial at the following city sessions.

Corbett had been busy in the weeks before his arrest in December, an Irish Times report in January reveals. In one instance, he told a man named Michael Henry “that he was an ordained priest named Father Walsh of Philadelphia, by means of which he obtained food, lodging and money”.

A 27-year-old stationer named Emily Wilds - who lived with her husband James on Capel Street, according to the 1901 census - was tricked into handing over an undisclosed sum of money on December 5th that year, about a week before Corbett was found out.

The false priest had for some time been a soldier stationed in Malta, before eventually coming to Ireland and begging for food and money, sometimes door-to-door. In one case, the court heard, he encountered a familiar face during his rounds: “. . . and by a curious coincidence, in one of the houses to which he called, there was a man who had served in the same battery with him.”

Corbett told the court he had arrived in Ireland from America the previous July. “He had a good position there. He brought here over 1,000 dollars, all of which he had spent in drink.”

He pleaded guilty to the charges, and was “let off with two months’ imprisonment, and he could then go back to America,” according to The Irish Times.

On the Irish Prison Register, he’s listed as being about 6 feet tall with blue eyes, fair skin and brown hair. He was recorded as being 39 that year - slightly younger than the description first given by Sgt Sheehan in evidence.

On court papers, the charge against him is listed simply as “begging”.