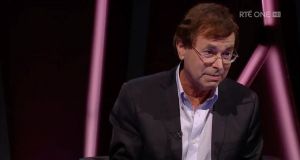 Former minister for justice Alan Shatter: ‘The news is confused’

His poem, Confusion, was a short take on the era of fake news and US president Donald Trump. He apologised to the audience before reading out the poem.

“The news is confused, nothing is quite right, alternative facts, newsreader contrite. Different versions of events portrayed, in the post truth age,” Mr Shatter read.

“Black is white, good is bad, the rain is dry, happy is sad. Newspeak triumphant, love is hate, words no longer matter, with this linguistic update,” he said.

“The world is flat, the moon is cheese, just lie back and enjoy the breeze. For very few care about what is said, remember that ultimately, we will all be dead.”

Mr Shatter was beaten to the fourth seat in the constituency by Green Party deputy leader Catherine Martin.

The Guerin report on the official response to allegations from Garda whistleblower Sgt Maurice McCabe led to Mr Shatter’s resignation in May 2014, after he was told then taoiseach Enda Kenny would not be able to express confidence in him in the Dáil.

The report found Mr Shatter did not properly heed warnings of malpractice within An Garda Síochána.

However, a statutory inquiry later found that Mr Shatter had responded appropriately to the claims.

1 Growing hope in Government of partial easing of restrictions after May bank holiday
2 Coronavirus: Government to extend restrictions for at least two weeks
3 Coronavirus: More ‘striking’ evidence BCG vaccine might protect against Covid-19
4 Chief medical officer urges people not to visit hardware stores
5 Coronavirus: Ireland will have to ‘live alongside the virus’
Real news has value SUBSCRIBE