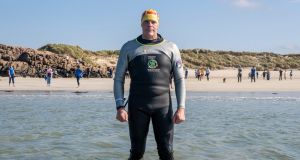 Just after lunchtime on Thursday, 56-year-old Henry O’Donnell pulled on his fins and walked into the sea at Carrickfin beach in Co Donegal in the hope of becoming the first person to circumnavigate the island in such fashion - a feat that could take him up to a year.

Fin-swimming, as the name suggests, involves the use of fins on the water surface, with a snorkel and mask. O’Donnell will also wear a custom made triathlon suit to combat icy temperatures.

A qualified beach lifeguard, specialist diver and swimming teacher, his FinSwim2020 website hails the effort as “one of the most inspiring, unique and challenging marine projects ever attempted in Irish coastal waters”.

And while that might sound a touch hyperbolic, such daring deeds are becoming the norm of the Donegal man and former member of the Irish Army’s Special Forces.

In 1992, he sustained multiple, life-threatening injuries after breaking his neck during the bicycle leg of a triathlon.

However, after recovering he went on to become the first Irishman to swim the 14km around Tory Island, and later completed the 38km Donegal Coastal Challenge Swim in 1997.

In 2004, having assessed the feasibility of swimming around Ireland, he recruited five other swimmers to form the Round Ireland Swim team.

When he gets fed up with the water he looks inland. In recent years he set off to conquer the lowest and highest points of four continents: Africa, Europe, America and Australia.

Thursday saw the father-of-six climb back into the Donegal waters for more record breaking adventures which also have a scientific element.

O’Donnell is participating in the PIER Project (Public Health Impact of Exposure to antimicrobial Resistance in Recreational Waters) at the National University of Ireland Galway, which aims to assess whether people regularly involved in Irish water activities are more likely to pick up and carry antibiotic resistance (AR) bacteria in their gut.

The FinSwim event will start and finish on Carrickfin, progressing clockwise around the coast of Ireland towards Tory Island and Malin Head. O’Donnell believes it could be September of next year before he climbs out of the chop for the final time.

His efforts are aiming to raise money for both the Irish Cancer Society and Water Safety Ireland.