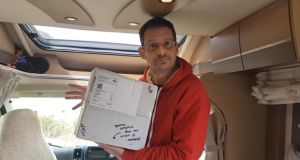 YouTuber Dan Holdsworth with his parcel, which was delivered to a Cork lay-by. Photograph: Youtube/TravelTrollsTV

An English couple who found themselves accidentally locked-down in a Cork lay-by when travel restrictions were imposed at the end of last month have spoken of their surprise and delight after receiving a care package from a fan of their YouTube travel videos.

Dan Holdsworth and Mazzy Holder have a channel on the video sharing platform which they have called Travel Trolls TV. For almost two years they have been posting short films of their adventures on the road as they travelled, first around the UK, and subsequently Ireland in a motorhome.

They arrived in Dublin on January 1st and made their way around the east, north and west coasts posting video updates along the way.

They had reached Cork by the end of March when Covid-19 related restrictions were imposed which meant people could not travel more than 2km from their homes.

Unsure as to what to do given that their home was also their means of travel, the pair decided it was better to be safe than sorry and found a lay-by “at the top of the mountains just outside Bantry” where they settled in.

“It’s so beautiful, we couldn’t of chosen a better place to have been in isolation,” Ms Holder told The Irish Times.

The guards and some local farmers have been checking in with them since the lockdown started and they have been making brief forays to local shops to stock up on provisions.

Mr Holdsworth said they have been getting “dirty looks” from people as they pull up outside shops. “People think we are tourists travelling around the place but we’re not, this is the only way we have of getting around.”

As they laid back in their lay-by, the couple made up their own home address “for a laugh as now it feels like home to us,” Mr Holder said.

They mentioned their new address on our YouTube channel as a joke and they asked if fans would like to send them fan mail or supplies. They thought no more about it.

But then, at the start of this week, there was a knock on their motor home door. Outside was “a man standing there in a yellow vest,” Mr Holder said.

“We were both so happy that An Post actually made the effort to deliver it to us,” she continued.

Inside the big box were small gifts including chocolates and drinks.

When they looked closely at the box they realsed that not only had their fan sent the parcel to the address they had given out on their video, they had also drawn a map on the box to help the postman find them.

“An Post truly did make both our day,” she said. “It’s been hard times on us all and just a small thing like getting a parcel has just made both our day.

For his part Mr Holdsworth said the couple would sit it out until they could move again: “We have no plans too leave until we see the whole of Ireland but we don’t know when we will get going again.

“I don’t think they are going to lift the restrictions any time soon but we are still in high spirits.”