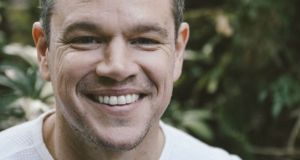 Matt Damon’s stay in Dalkey has been the subject of much speculation. Photograph: Elizabeth Weinberg/New York Times

Hollywood actor Matt Damon, who has been ‘stranded’ in Dalkey throughout the Covid-19 crisis, has shared a video of himself congratulating the graduation class of a local secondary school.

The video is addressed to the class of 6th-year students in Loreto Abbey Dalkey. The video was sent to the Principal of the all-girls school.

Now this how you win the hearts of a community. Our favourite neighbour Matt Damon just sent this video to the graduating class of my daughter's school Loreto Abbey in Dalkey. pic.twitter.com/nra6w5a4sp

“You guys are awesome,” he told the girls. The actor told the all-girls school he was “sorry” they had to study and graduate “from quarantine” but added “Congratulations - what an achievement. Good for you guys. I’m thinking about you.”

The Hollywood actor was photographed in Dalkey last month with a plastic SuperValu shopping bag in his hand. His stay in the area has since been the subject of online speculation and an article by The New York Times. Earlier this week, the actor broke cover to speak with Graham O’Toole and Nathan O’Reilly on the Dublin station Spin 1038.

The video has gone viral on social media platforms, with one Twitter user writing: “We love you Matt Damon! Stay here forever”. The mother of one student at Loreto Abbey Dalkey wrote “Mixed emotions here for my daughter’s last day in Loreto Dalkey, no running through corridors, no guard of honour but massive thanks to Matt Damon for sending the message. It made the girls’ day!”