A hat in the Shannon: The mysterious disappearance of an MP’s brother

In 1890, a man carrying cash went missing after failing to make his Westport connection 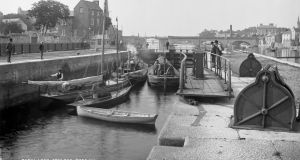 Barges and boats at the weir on the Shannon at Athlone, circa 1895. Photograph: National Library of Ireland/Flickr commons

First, a hat was found floating in the Shannon. The other clue taken from the water near the saw mills in Athlone was a pocketbook. The name inscribed on the inside told police they had something belonging to the man they sought: “H Ellison Macartney.”

The same name adorned a set of luggage, left by its owner in the charge of a railway station clerk on Friday, December 5th, 1890, in the final moments he was seen alive.

Henry Elllison-Macartney had been missing for a number of days when a reporter for the Weekly Irish Times wrote about the discovery of the items in a story on page five, under the all-upper-case headline: “MYSTERIOUS OCCURRENCE AT ATHLONE.” The subsequent press coverage was above the ordinary for a typical missing person, but Mr Macartney’s case appeared to be no ordinary disappearance, and he was no ordinary citizen.

The “mysterious” case of Henry Ellison-Macartney received the attention it did partly because of who his brother was – MP for South Antrim, William Ellison-Macartney – a unionist politician who served as grand secretary of the Orange Order. The men’s father, John Ellison-Macartney, was himself a former Tyrone MP.

Henry’s final movements after arriving in the town were pieced together, and the play-by-play was published in The Irish Times.

Athlone was only supposed to be a pit-stop for Henry on a longer journey from Clogher, Co Tyrone to Westport. After arriving in Athlone on Friday afternoon, he went straight to Hare’s Hotel in the town, where he dined at about 6pm.

It’s unclear what caused Henry to miss his connection. Perhaps he stayed too long in the hotel, but either way found himself five minutes too late to catch the train to Mayo, which departed at 7.30pm. Resolving to catch a later train, he left his luggage with the clerk at the station and “returned to the town, proceeding in the direction of the Castle.” He was never seen alive again.

Reports circulated and the missing man’s MP brother travelled to Athlone the following Monday. That same day he engaged any available local boatman to drag the river for remains. He managed to subtly stoke the fire of a foul-play theory, when he noted that when Henry left Clogher, he was carrying a valuable watch and chain, and what a Connacht Telegraph report said was “a sizeable amount of money”.

Papers ran with the foul play line. They had a strong case to do so, independent of the stash of valuables carried by the missing man.

Residents along the Shannon quickly came forward to report hearing cries of “murder!”, “murder!” – “Don’t kill me” and “Don’t drown me” were variants reported in the press. The pleas for mercy were supposed to have been heard in the very early hours of Saturday and, depending on the paper you bought, occurred any time between midnight and 2 o’clock in the morning.

Just as quickly as tales of robbery and murder reached the dailies, they were played down after a body was found floating in the Shannon on Tuesday.

One report in the Connacht Telegraph had claimed a chain was found near the location of the other items, “bearing traces of a watch having been wrested from a vest pocket”. The Leinster Express was among the newspapers quick to dismiss whispers of murder as baseless, highlighting the watch in particular: “It is clearly established that the case was one of accidental drowning, and that there was no foundation whatever for the sensational rumours of foul play. His watch and chain, his purse and money, his cigar case and other articles were all found undisturbed in his pockets.”

By the 13th, most papers had dropped the pursuit of the bloody cries on the banks of the Shannon. That day, The Irish Times reported that Macartney “was seen in the street between 8 and 9, and is supposed to have walked towards the Shannon bridge and to have fallen into the Shannon at a dangerous spot where accidents have already occured. There is no reason to suspect foul play, so far as the reports received go.”

As a search of the archive of The Irish Times shows, it really was a dangerous spot. Ten years beforehand, a jury giving a verdict at the inquest of John Crane – a young man who visited Athlone and died after slipping into the Shannon – recommended “that the approaches to the Shannon on the Westmeath side should be fenced off and protected by the Board of Works.”

Two more similar deaths appear between of John Crane and Ellis-Macartney. In 1880, a young Ballaghaderreen man named Ferrer went for a walk on the quay “where (the night being dark) he was accidentally drowned”. George Good met the same fate in 1885 after a night of drinking. He wound up on the coroner’s table and it was “supposed he walked into the river and was accidentally drowned.”

The shouts of “murder” that carried on the air the night Henry went missing were never explained in further newspaper reports. A public meeting was convened in Clogher, where a motion was passed expressing attendees’ grief to Henry’s family, and commending “his beautiful, upright Christian character, the sweetness of his disposition, his engaging, kind manner, the unselfishness of everyone, made him beloved by all who knew him. He will ever live in our memories.”

The chairman was thanked, the meeting separated and the death deemed another sad misfortune on the banks of the Shannon.