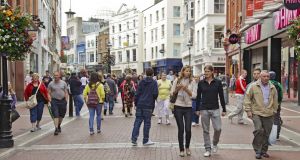 Visitors of Dublin’s Grafton Street were in a particularly buoyant mood on Friday night as they broke into an impromptu dance.

Visitors of Dublin’s Grafton Street were in a particularly buoyant mood on Friday night as they broke into an impromptu dance to music from a five-piece band.

The jazzy rhythms of buskers got more than a few passers-by tapping, twirling and dusting off their Charleston steps at around midnight.

The happy scene looked more like a 1920s American dance hall than a Dublin shopping street.

“The atmosphere was just electric,” Bob Dixon, who videoed the spectacle, told The Irish Times. He added: “There was a New Orleans vibe to the whole thing. Everyone was just buzzing.”

The professional photographer happened to be wandering past and couldn’t resist recording the spontaneous swing session, he said.

“It was a lovely, warm T-shirt night. The great thing was there were young, there were old, there were people linking arms with random other people. It was so nice to see people coming together,” said Mr Dixon.

Mr Dixon’s video has been viewed more than 200,000 times since it was uploaded to social media on Saturday.

“I’m gobsmacked by how well this has done,” he said. “It’s nice because it’s just got that feel-good factor.”

Even Mr Dixon, who ensured he kept a steady hand while recording the clip, said he couldn’t resist shimmying into the crowd for a boogie afterwards.

2:07 Varadkar: 'We are heading into a recession'