Invasion of beach at Bannow, Co Wexford, in May 1169, will be celebrated this weekend 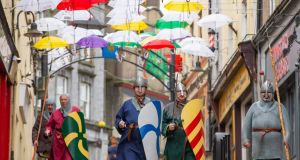 The heritage town of Enniscorthy is under siege by the Normans, once again. But this time the “Normans” are locals, dressed up to celebrate 850 years since the real Normans landed in Ireland.

Enniscorthy Castle will be at the centre of the events this bank holiday weekend, with re-enactments around its grounds and fairy tales told on its rooftop.

Wexford-born Ray Murphy (73) is set to don chain mail armour to play a Norman knight there, and he and other people dressed as historical figures will share facts about the 12th-century events.

On Saturday, he will be stationed in the castle’s grounds where his team of knights will showcase traditional Norman weaponry, such as bows, arrows, spears and swords. He will be participating in a historical pageant, where players will act out characters, such as Henry II and Richard “Strongbow” de Clare. “It is one of the highlights of the year,” he said.

A nurse until he retired, Mr Murphy has been involved in historical re-enactments since 1989, when he participated in a re-enactment of the storming of the Bastille.

Visitors can make Norman shields, taste the food of peasants and kings, and participate in medieval games. There will be dancing in the Abbey Square and 33 live music gigs in the town’s pubs and bars.

The invasion of the beach at Bannow, Co Wexford, in May 1169 will be celebrated this weekend as part of a year-long programme of events taking place across the county.

It is part of Fáilte Ireland’s promotion of Ireland’s Ancient East with the theme of castles and conquest.

The Norman event takes place in conjunction with the town’s oldest-running festival, the annual Strawberry, Street Rhythms and Roots Festival.

One of the event’s organisers, Liz Hore, urged visitors to attend the “Taste the Normans” event, where people can eat the food of peasants and kings. “You would be surprised as to who had the healthiest diet,” she said. “Meat was very common, especially animals like game, wild boar and rabbit.”

If visitors haven’t filled up on strawberries, pottage, a type of vegetable soup that was popular during the time, will be available for all to taste. The All-Ireland Farmer’s Market will also return to the town this year.

2:07 Varadkar: 'We are heading into a recession'